Authorities are busy recovering stolen goods after the looting spree 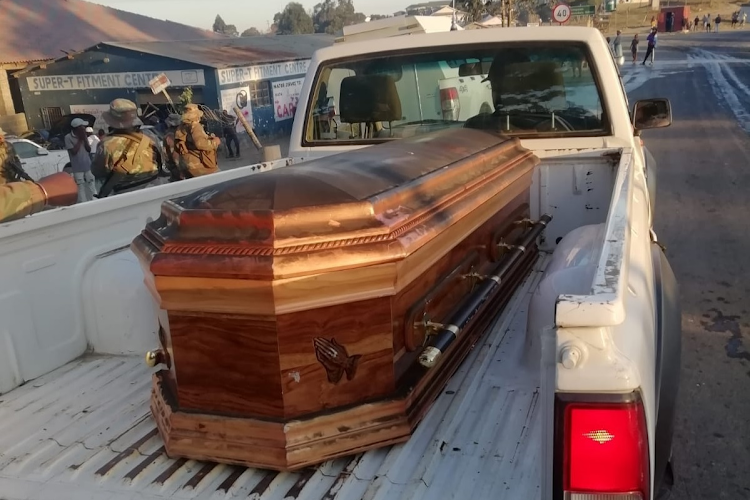 A casket was recovered in Ezinqoleni in the Ugu district of KwaZulu-Natal after last week's looting spree. The area was raided by police searching for stolen goods.
Image: SAPS

After days of looting in KwaZulu-Natal and Gauteng, the cleanup is in full swing and like a bad hangover, people caught up in the frenzy have realised the implications of having a house full of unpaid-for-goods.

What started out as a protest to free former president Jacob Zuma quickly descended into violent destruction of infrastructure and the looting of shops and goods.

President Cyril Ramaphosa described the unrest as a “failed insurrection” attempt in an  address to the nation.

Reiterating this at an ANC Mandela Day event he said: “It is clear now the events of the past week were a deliberate, co-ordinated and well-planned attack on our democracy, on our economy and our people’s livelihoods. Our young democracy and our movement are going through, at the moment, a very difficult time.”

SAPS and SA National Defence Force members sent in to quell the violence are now on a recovery mission — retrieving a mountain of stolen goods.

Efforts continued on Wednesday, with many of the looters having abandoned goods after it became clear that homes would be raided in search of stolen items.

A clearing at the informal settlement in Mountain Rise, Pietermaritzburg, resembled a graveyard of luxury goods on Monday as 4 South African Infantry Battalion and police arrived to recover looted goods. Scores of items had been abandoned in the area.

One of the more unusual sightings was a casket recovered in Ezinqoleni in the Ugu district of KwaZulu-Natal on Monday. It has not yet been established whether the wooden item was empty at the time of recovery.

On Tuesday the Glebelands hostel in Umlazi, Durban, was searched by SAPS. The community living in block 51 of the hostel responded by throwing looted items out of the windows to avoid being caught in possession of them.

Marc van Olst, owner of several Pie City shops around the country, said last week he lost 13 shops in KwaZulu-Natal. His shops in Gauteng were not as badly affected, but he chuckled at the sight of his pie-maker in the middle of a looted street in Johannesburg.

“Those are specialist ovens. I can imagine someone sitting in their home wondering what to do with it.”

The company posted on its Instagram account that it was looking for the couch but was willing to exchange it for something that “fits the house”. The post has since been removed from social media but not before TikTok local Tums Mmope was able to make light of the situation.

Cele said the stolen goods would be placed in storage facilities and might be used as evidence in pending cases.

“They are going to SP13, where police keep anything that might be used as evidence. There is a meeting between the police and the [National Prosecuting Authority] to work out what will happen to the goods after cases have been finalised.

“Evidence rooms are full. Right now, we are trying to get a warehouse where we can keep them.”

Acting minister in the presidency Khumbudzo Ntshavheni said on Thursday that 12 suspects had been under surveillance for inciting the spree.

SAPS said 3,407 suspects have been arrested on various charges.

Below are more images of goods recovered, which include anything from clothing to exercise equipment, furniture, window frames, double-door fridges, chest freezers, alcohol, washing machines, bicycles and hardware supplies.

#sapsKZN Police Stations under Umgungundlovu District recovered some of the property that were taken during the unrest in the province. #RejectAndReportStolenGoods #DontBuyStolenGoods #CrimeStop ML pic.twitter.com/6uZvgNWoNN

#sapsKZN On Tuesday members of the Provincial Drug and Firearm Unit conducted an operation in the Durban CBD area resulting in the recovery of items taken from the recent looting with an approximate value of R143 000. #RejectAndReportStolenGoods #DontBuyStolenGoods #CrimeStop ML pic.twitter.com/2Dr1kmBsUa