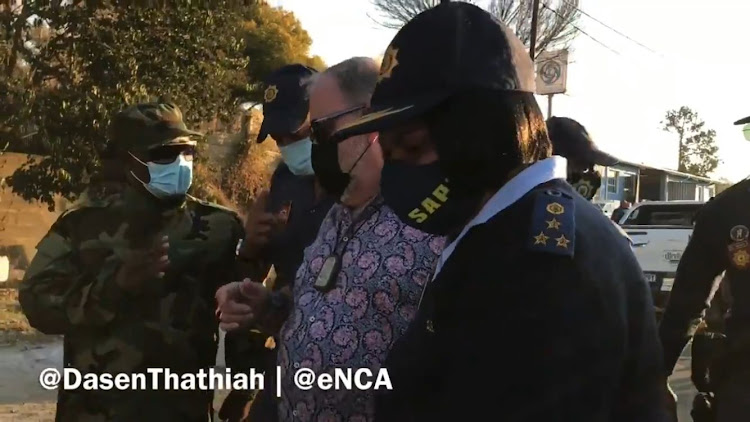 Carl Niehaus is taken into police custody outside the Estcourt prison on Thursday.
Image: Dasen Thathiah via Twitter

Niehaus — a staunch Zuma backer — arrived at the Estcourt Correctional Centre, where former president Jacob Zuma is currently incarcerated, shortly before 4pm. Outside the facility he began engaging with a handful of Zuma supporters.

After his short speech, Niehaus began conducting interviews with the media.

While speaking to the SABC in an interview that was being broadcast live, a number of police officers swooped in and whisked Niehaus off down the road.

Suspended ANC member Carl Niehaus has been arrested outside the Estcourt prison where #JacobZuma is being held. He was addressing supporters when police moved in to break up the illegal gathering. #eNCA pic.twitter.com/vwqTZUEevd

Niehaus was placed in a police van and taken to the Estcourt police station.

It remains unclear as to what charges he will face. However, some MKMVA members suspect he may face charges of inciting violence — a charge they denounce. It was also speculated that Niehaus could face charges relating to a breach of lockdown regulations.

The ANC has expressed sadness over the imminent arrest of former president Jacob Zuma as the party announced the suspension of one his staunch ...
News
10 months ago
Next Article