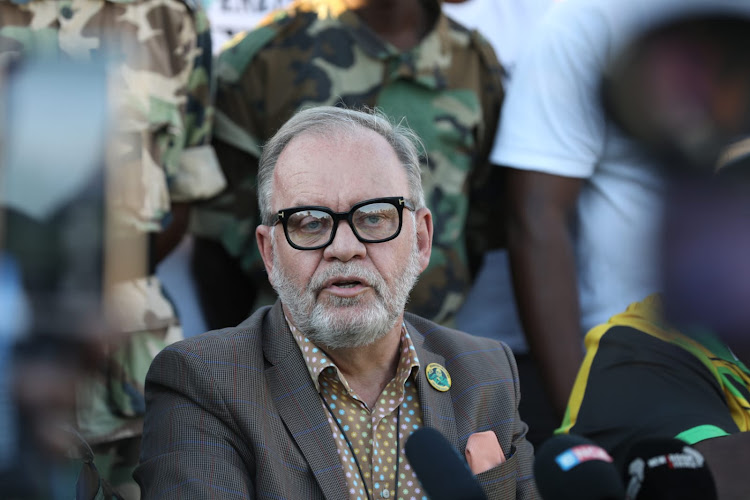 MKMVA spokesperson Carl Niehaus, who was suspended by the ANC on Wednesday, speaks to media outside former president Jacob Zuma's home in Nkandla at the weekend.
Image: SANDILE NDLOVU

Shortly after the NEC announced its decision to disband the MKMVA, of which Niehaus is spokesperson, he released a statement saying the NEC - the ANC's highest decision-making body in between conferences - had been emotional and angry.

Niehaus said the move was unacceptable and the MKMVA would not accept it.

“We are an autonomous structure, and it is not legally nor politically possible for the ANC to disband the MKMVA,” he said.

Before his suspension on Wednesday, two ANC NEC members had told TimesLIVE on Tuesday night Niehaus's statement was “the last straw” and that he was now considered a “very rogue” element.

ANC deputy secretary-general Jessie Duarte wrote to Niehaus, stating that the ANC NEC had noted with concern the remarks he made outside the home of former president Jacob Zuma in Nkandla at the weekend. She said the ANC had concluded that he had brought the party into disrepute.

The MKMVA press briefing at the entrance of former president Jacob Zuma’s home degenerated into chaos and was stopped prematurely on Friday after ...
News
10 months ago

Niehaus, a staunch Zuma supporter, threatened violence in defence of Zuma at the weekend. This as Zuma's arrest loomed after the Constitutional Court sentenced him to 15 months behind bars for contempt.

Niehaus's suspension letter also stated that the ANC would be instituting disciplinary hearings against him within 30 days. The hearing would be adjudicated by the national disciplinary committee.

Uriel Abrahamse, the party's national presenter - essentially the internal ANC prosecutor - was, according to the letter, expected to prefer charges on Niehaus and set out his rights in this regard.

“The NEC has also decided to temporarily suspend your membership in accordance with the Rule 25.56 of the ANC constitution pending the institution of disciplinary proceedings,” the letter reads.

It goes on to say that he was suspended with immediate effect, as the NEC believed he was likely to continue with acts of misconduct and cause further damage to the name and reputation of the party.

Niehaus, a vocal supporter of the so-called radical economic transformation (RET) grouping, is also a staffer in the office of suspended ANC secretary-general Ace Magashule.

Niehaus was also earlier this year accused of using the MKMVA to run a parallel structure from the sixth floor of Luthuli House, which is where Magashule’s office is.

Sounding the warning in March, ANC Eastern Cape secretary Lulama Ngcukaitobi said RET forces had to be dealt with, or else they could become a breakaway party like the EFF or Cope.​ Niehaus has since indicated that he would be appealing his suspension with the ANC's national disciplinary committee of appeals.