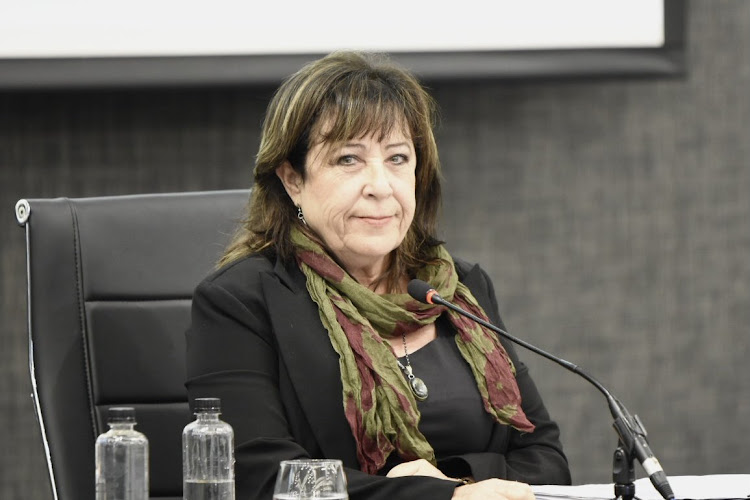 Sharon Marks, Durban’s acting regional court president, was one of eight candidates being interviewed by the Judicial Service Commission on Thursday for three positions on the KZN bench.
Image: RSA Judiciary

Durban’s acting regional court president, Sharon Marks, assured chief justice Mogoeng Mogoeng that the “trend” of regional court magistrates in Pietermaritzburg “disappearing on Fridays” is a thing of the past.

Marks is one of eight candidates being interviewed by the Judicial Service Commission (JSC) on Thursday for three positions on the KwaZulu-Natal bench.

The chief justice did not disclose exactly when he made the “surprise” visit to the magistrate’s court, which is next door to the high court in the city. But when he went there, he said, there was not a single regional court magistrate in the building.

Marks said there were about 15 regional court magistrates based in Pietermaritzburg.

“I don’t exactly know what happened at that point of time, and I don’t want to run anybody down. But it seems they were finishing their court rolls and going home.

“I did investigate. I was given excuses, reasons, that the electricity was shut down, there was no water in the building. But now we have a system in place. I get a report, the DPP [director of public prosecutions] gets a report, the head of legal aid gets a report and the regional head gets a report.

"Did I like it to represent a person with those allegations against them? No. Was it for a duty? Yes — and that is what the public often do not ...
News
1 year ago

“So for example, a prosecutor or a magistrate cannot say the court wasn’t sitting because there was no legal aid, because the head of legal aid will know that there was someone in court.”

The chief justice said he was informed at that time that it was a “trend” and “you won’t find them on a Friday from morning until knock-off time”.

Marks responded: “It is not a trend any longer.”

Earlier on Thursday, veteran advocate Bruce Bedderson indicated that grumpy judges should be a thing of the past.

“We come from an era where people have been so badly treated in the past ... young practitioners were shouted at. Instead of breaking someone’s spirit, we need to encourage it. If I was part of the JSC, I would identify people who have a transformed mindset, who treat people with respect and dignity. Those are the virtues we are looking for.”

With 24 years' experience as an advocate, a very busy “varied practice” and five children, he was asked about the financial implications of a judge’s salary.

He responded: “If I told my father that I couldn’t afford to live on a judge’s salary, he would tell me I had forgotten where I came from.”

In his interview, attorney Bert Laing said judges should get involved when they see an accused person being represented by an inexperienced lawyer who is just “going through the motions”.

He said it was also important for judges and magistrates to come from different communities so they could understand the backgrounds of people appearing before them.

The interviews are continuing.

Gauteng High Court judge Wendy Hughes is one of 11 candidates nominated for five vacancies on the Supreme Court of Appeal.
News
1 year ago