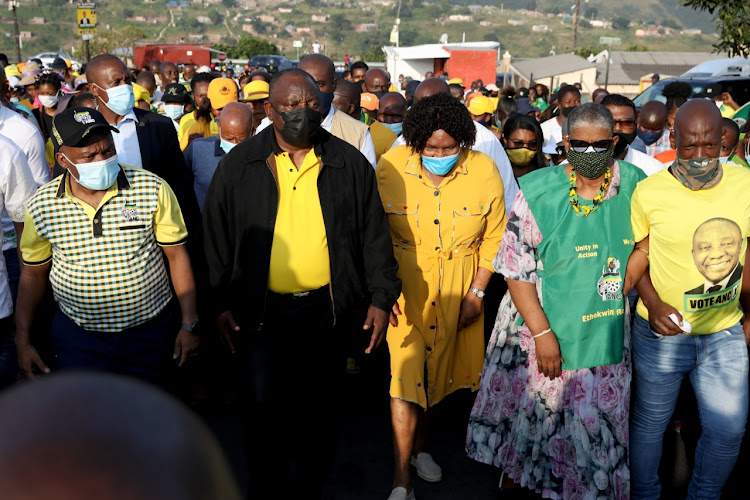 This year’s local government elections should go ahead as planned, President Cyril Ramaphosa said on Thursday.

Ramaphosa was speaking during an ANC campaign rally in Durban ahead of a by-election next week.

His comments came as the Electoral Commission (IEC) on Thursday held a meeting to discuss the possible postponement of the elections following calls from the EFF. The red berets argued that Covid-19 lockdown restrictions would not allow for free and fair elections to be held because parties would not be able to campaign effectively.

Ahead of the rally in Durban, the ANC’s fractured unity in KwaZulu-Natal was on display as two groups sang from different hymn books. The one group was in support of Ramaphosa while the other expressed sympathy for ousted eThekwini mayor Zandile Gumede.

The divided ANC members were welcoming Ramaphosa to Durban as part of his work on the campaign trail ahead of a by-election in the Hammarsdale area, scheduled for next week.

In welcoming Ramaphosa, one group burst into songs that expressed sympathy for Gumede. 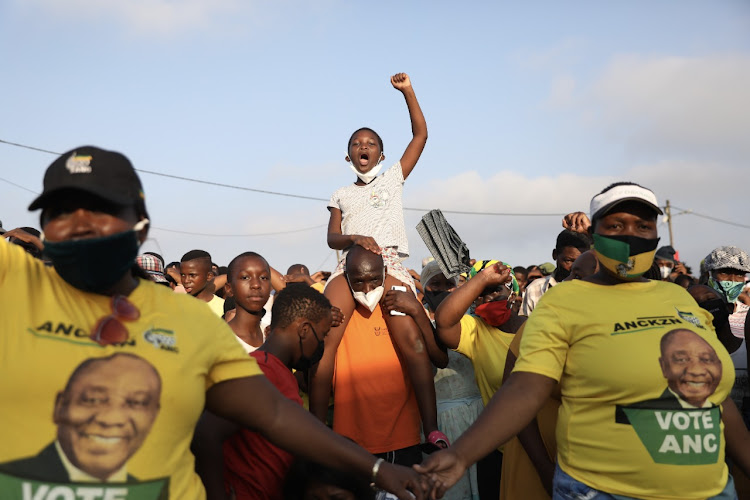 Residents of Hammarsdale came out in support of President Cyril Ramaphosa - and some in support of those in a rival ANC camp - during a pre-by-election rally on Thursday.
Image: Sandile Ndlovu

Gumede is among the ANC leaders expected to step aside from their party responsibilities as she is facing multiple counts of fraud, corruption and money laundering linked to an eThekwini municipality solid waste tender amounting to R320m.

The second grouping, which walked alongside Ramaphosa, ANC KwaZulu-Natal chair and premier Sihle Zikalala and other deployees of the ANC NEC, only sang pro-Ramaphosa songs and ANC slogans.

All of that was put aside as soon as Ramaphosa took to the podium to address a community meeting as part of the by-election campaign.

The president also used his address to pour cold water on calls for the local government elections to be rescheduled.

“Let us go to elections because then we can choose the ANC that will take us forward. If you vote for another party, that is regressing. Let’s do that [vote ANC] next week and throughout the other six by-elections.

“We shall triumph, even in October when we go to local government elections,” said Ramaphosa.

The ANC president said government has had to work harder for the people of SA during the trying Covid-19 times, emphasising the need to go ahead with local government elections.

He counted increments in social grants and the R350 special relief grant for the unemployed as some of the ways the governing ANC showed care for the poor, even though there was “no money” for the grant to be extended.

“Let us now go out in numbers to vote for the ANC in this by-election and show them the ANC will continue to win and assist our people.”

Ramaphosa also told the meeting that while government had temporarily suspended the use of the Johnson & Johnson vaccine over safety concerns, theywill get” the Sputnik V vaccine from Russia and Sinovac from China to inoculate South Africans.

The president earlier visited the Durban port, the biggest in SA, where he met with management to discuss expansion that will result in employment opportunities.

“Covid-19 brought a snag in our plans to grow the economy. We would be much ahead by now, but we are working hard to ensure that, despite that, our people have access to the economy.

“We met with the management to see how we can create jobs and small business owners can benefit so our economy grows,” the president said.

The ANC on Thursday sent a list to Luthuli House in Johannesburg of members who will be asked to step aside due to corruption charges and other serious crimes, provincial spokesperson Nhlakanipho Ntombela told SowetanLIVE's sister publication TimesLIVE.

No need to postpone elections

In the wake of the EFF’s call for local elections to be postponed to 2024, let me point out that the issue of governance doesn’t rest only with the ...
Opinion
9 months ago

Cosatu 'not abandoning the ANC yet' in the coming elections

Trade union federation Cosatu will not abandon the governing ANC ahead of this year's local government elections, despite tensions over a wage freeze ...
News
9 months ago
Next Article