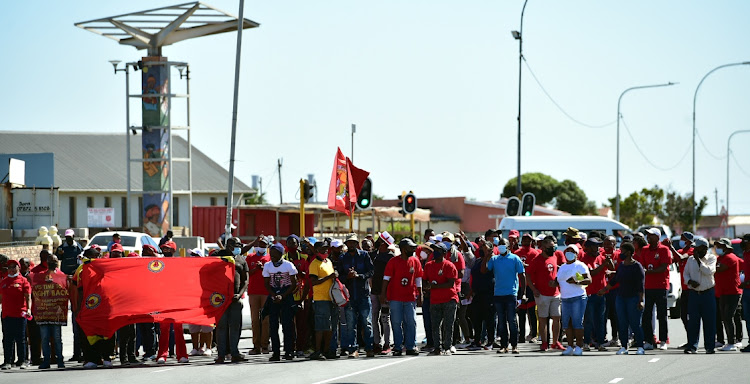 Instead of prioritising the changing names of cities and airports, the government should focus on saving  and creating more jobs.

This was the view of South African Federation of Trade Unions (Saftu) Eastern Cape co-ordinator Andile Bloko, who led about 80 workers in a march from New Brighton to the Gqeberha City Hall on Wednesday.

They picketed outside as part of a strike in urban centres across SA, demanding the creation of more jobs.

The protest took place just a day after Stats SA revealed that 7.2-million people were without jobs in the fourth quarter of 2020, pushing SA’s official unemployment rate to 32.5%.

Uitenhage is now Kariega while the East London Airport is King Phalo Airport.

King William’s Town will henceforth be known as Qonce.

Addressing the crowd, Bloko said renaming cities should not be a priority.

The Bay leg of the national SAFTU 'slow' march is currently underway.

Eastern Cape Provincial SAFTU convener, Mziyanda Twani, said they were going to march slowly to the Bay city hall to submit a memorandum.

“The very airport in Port Elizabeth has retrenched workers — there is no economy recovery plan, there is no stimulus package, all that we see is people who are busy enriching themselves through tenders.

“As workers we are not saying decolonisation is not a priority.

“They should have done that in 1994 when the national anthem was [changed].

“When the flag was changed, they should have renamed these towns then.

“Priority must be focused on the poor, create job opportunities,” Bloko said.

Workers sang struggle songs as they blocked a number of intersections in the centre,  including Govan Mbeki Avenue, causing a minor traffic jam.

“These workers are overworked because there is a shortage of workers and the shortage is affecting service delivery.

“This rate of unemployment is a ticking time bomb in the country — we are going to see things we have seen in other countries, where people implode onto the streets,” Twani said.

The Congress of SA Students (Cosas) and the SA Democratic Teachers Union (Sadtu) are the two most destructive forces in education.
Opinion
1 year ago
Next Article