Ten people have been arrested after raids on suspected drug dens and brothels in Witbank.
Image: 123RF/BELCHONOK

Ten people were arrested after a raid operation on suspected brothels and drug dens in Emalahleni (Witbank), Mpumalanga, the Hawks said on Friday.

The operation was conducted on Thursday by various units, including the tactical response team and family protection unit.

“During the search in the identified premises, sex workers were interviewed and they confirmed that they originate from Zimbabwe and Lesotho and all provinces [around the country],” said Hawks spokesperson Dineo Sekgotodi. 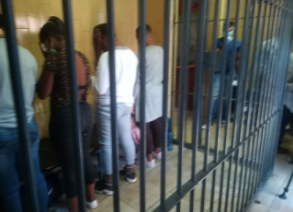 Some of the people arrested during the raids in Witbank on Thursday.
Image: Supplied / SAPS

“More than 10 suspects were arrested and charged for contravening the immigration act and dealing in drugs,” she added.

The group would appear in the Witbank magistrate's court on Friday.

“The main aim of the Hawks was to disrupt the illegal activities and to create awareness on gender-based violence, including trafficking in persons,” Sekgotodi said.

“During the campaign, more information was shared by the community about gender-based violence and trafficking in persons.”

Police have for years been trying to rid the city of prostitution but in an interview with TimesLIVE last year admitted that it was tough to tame the growing trade.

MMC of the Emalahleni municipality and the provincial head of the Hawks, Maj Gen Zodwa Mokoena, applauded the work done by the teams in the latest bust.

Girl, 14, among 10 rescued from 'brothel' in Bloemfontein

The women and girl were rescued and a man arrested.
News
2 years ago
Next Article