Christian Adendorff, adjunct professor at Nelson Mandela University (NMU),  has resigned after academic staff and students at the institution called for him to be fired following a DispatchLIVE report which exposed his plagiarising of chunks of text for a 2017 Ngqushwa Municipality policy document from a 16-year-old Namibian government file — despite being paid R600,000 to write it.

DispatchLIVE had in mid October shown that Adendorff lifted sections from foreign policy documents which were repeated almost verbatim and without  attribution in Ngqushwa and Amathole municipal presentations.

Adendorff had insisted that this was  “standard practice” and did not amount to plagiarism. 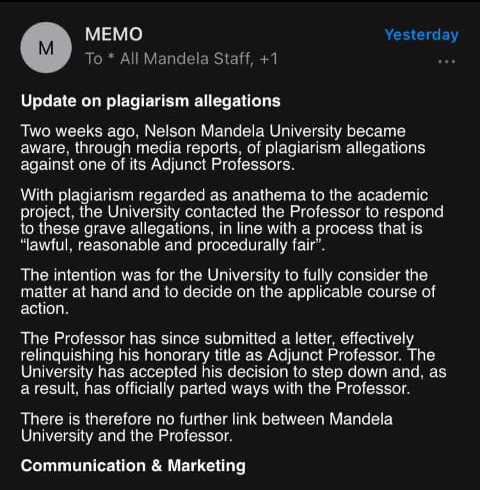 In a memo, NMU communications and marketing said, “The Professor has since submitted a letter, effectively relinquishing his honorary title as Adjunct Professor. The University has accepted his decision to step down and, as a result, has officially parted ways with the professor.”

The university further distanced itself from Adendorff, by emphasising: “There is therefore no further link between Mandela University and the Professor.”