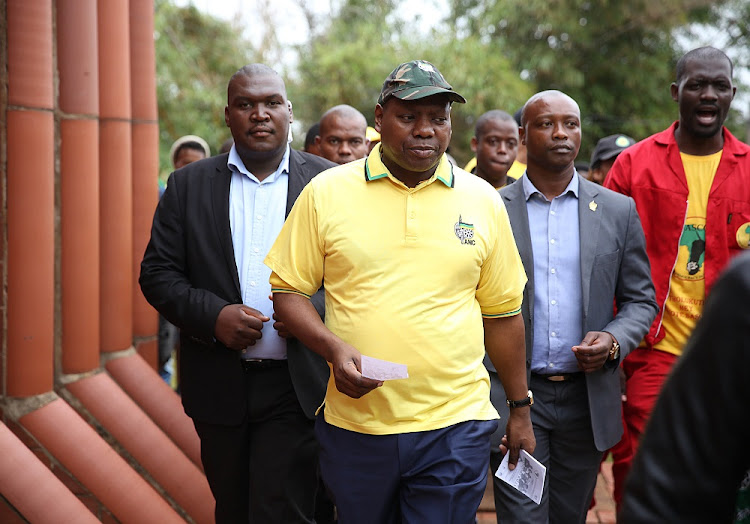 Zweli Mkhize received R6.5m from businessman Edwin Sodi in a transaction referenced as 'Zweli Mkhize'. Sodi said it was a donation to the ANC and Mkhize's name was used as he was ANC treasurer-general at the time.
Image: THULI DLAMINI

Controversial businessman Edwin Sodi was grilled on Tuesday about several payments his company made to prominent ANC figures.

Sodi, the director of Blackhead Consulting, which got most of its business from the departments of human settlements in Gauteng and the Free State, was giving testimony at the state capture inquiry.

He was quizzed about several payments flagged from his company with references to several high-ranking ANC leaders and the party itself. Sodi explained the individuals as being either “my friend” or “business partner” and admitted that he generously donated to the ANC, particularly during the 2014 election campaign.

The names of ANC leaders that were flagged were those of health minister Zweli Mkhize, labour and employment minister Thulas Nxesi, ANC treasurer-general Paul Mashatile and  deputy ministers Pinky Kekana and Zizi Kodwa.

Nxesi received R45,000 but Sodi said this payment, in two tranches of R15,000 and R30,000, were not for Nxesi's benefit but for an underprivileged child he was helping.

Mkhize 'shocked and dismayed' at shooting of Dr Abdulhay Munshi

Health minister Zweli Mkhize on Friday joined the health fraternity in mourning Johannesburg anaesthetist Dr Abdulhay Munshi, who was gunned down in ...
News
1 year ago

Sodi's company also paid R6.5m in a transaction referenced as “Zweli Mkhize”. He said the payment was in fact a donation to the ANC but Mkhize's name was used as a reference because he was the ANC treasurer-general at the time.

Sodi used the same line to explain why he paid R371,000 to Paul Mashatile.

“That was payment made directly to the ANC,” said Sodi.

According to him, Kodwa had “financial challenges” when he worked at Luthuli House, notorious for delayed salary payments to staff.

It was in times like these that Kodwa would call on him to intervene and he did so because they were friends.

Said Sodi: “Zizi [Kodwa] is a friend I have known for a number of years [and I] made payments to him in his personal capacity when he still worked for the ANC before he became deputy minister.

“These were payments I made to him as a friend when he requested assistance for a number of times.”

The commission also heard that Sodi had paid R3.5m for the purchase of T-shirts for ANC volunteers. He admitted that he did this because he was a supporter of the ANC, though not a card-carrying member of the governing party.

“Because I grew up in the ANC, the fact that there would have been some donations either from myself or my company, I do not see that as strange, fraudulent or as corrupt unless someone convinces me otherwise,” said Sodi. “I do not say there is any crime in one supporting a political party of his choice.”

Sodi is under scrutiny for how Blackhead Consulting was awarded a R255m contract for the eradication of asbestos roofs in the Free State. He had subcontracted the work for R41m and the subcontractor further subcontracted for less than R20m.

Sodi is due to testify at the commission again at a date yet to be determined.

The commission has adjourned for the day after the postponement of testimony by former Free State MEC for human settlements Mosebenzi Zwane to October 13.