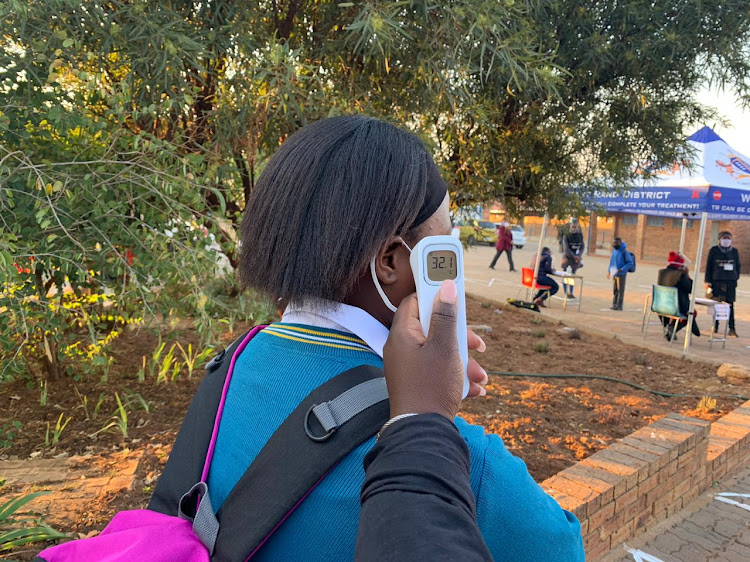 Pupils from Tsakani Primary School in Kagiso on the West Rand being screened before entering the school.
Image: Iavan Pijoos/TimesLIVE

If schools open fully at month end, the predicted peak for Covid-19 could be brought forward and the number of infections could double, says an expert.

The data prediction was presented by Prof Bruce Mellado of Wits University during the week’s Covid-19 provincial command council update on Thursday.

Mellado is one of the experts helping the Gauteng government with a modelling strategy for Covid-19 using the data from the previous months.

“We are ready to understand where the pandemic is going, and the July data contain an important piece of information on how the population reacts to non-pharmaceutical interventions. [Like looking at] what is the level of adherence of the population to social distancing.

“In July the pandemic has strongly slowed down, that is an empirical observation and not theoretical. The population has significantly enhanced adherence to social distancing, we have to take that as a baseline to make predictions,” Mellado said.

He said to revise their strategy, they had devised two perspectives, the optimistic and pessimistic, to keep up with the pandemic's unpredictability.

“The optimistic scenario is that the peak will occur about December and January 2021. The social distancing adherence has flattened the curve by pushing the peak a few months down the road.

“In the pessimistic scenario we have a mild peak which is 20% higher about November, which still is much milder than previous scenarios in earlier updates,” he added.

SA recorded just 2,879 new Covid-19 cases on Wednesday — the second day in a row that fewer than 3,000 infections have been confirmed. Of these, KwaZulu-Natal accounted for about 1,000 of the new cases, Gauteng about 500, and the Western Cape about 200. Health minister Dr Zweli Mkhize said the latest confirmed cases took the national total to 568,919.

The predicted peak about November will bring the maximum number of cases to about 100,000-120,000 in the province.

Mellado said part of the scenario planning is the question of what will happen if all schools across the province are opened towards the end of August.

“The peak will be brought forward and the maximum number of cases doubles [200,000 cases]. A small change in behaviour has an affect.

“There are different scenarios; the relaxation of lockdown is a complex matter. Whatever happens, it should be done gradually,” he added.

“The province has been able to handle the first significant surge. Despite the success we have to be cognisant that this maximum and drop is not a result of the pandemic having reached a peak. The possibility for new surges is still there,” he said.

The department of education is in a race against time to temporarily replace about 20,000 teachers who won't be able to return to class due to ...
News
11 months ago

KwaZulu-Natal education MEC Kwazi Mshengu said he would not tolerate school disruptions as Grade 7 pupils resumed classes on Monday after a two-week ...
News
11 months ago
Next Article