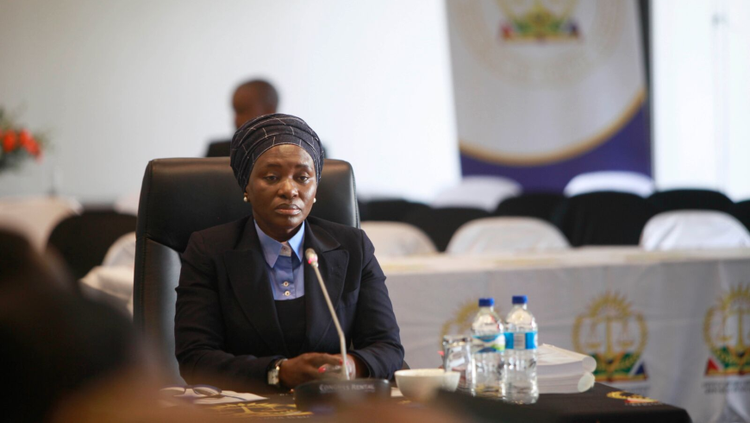 Former Prasa chairperson judge Nana Makhubele told the state capture commission on Wednesday that she denied all allegations against her.
Image: GroundUp/Judges Matter

Former Passenger Rail Agency of SA (Prasa) chairperson judge Nana Makhubele on Wednesday night told the state capture commission that she denied every allegation that has been made against her.

In a bruising three-and-a-half-hour session where she was grilled by commission chairperson deputy chief justice Raymond Zondo, Makhubele poured cold water on allegations that she had been “deployed” to Prasa by former president Jacob Zuma to “clean up the mess”.

Makhubele stated that she had, in fact, never met Zuma until last year when she saw him at a “breathing distance” in Limpopo during the inauguration of Cogta minister Nkosazana Dlamini-Zuma as the chancellor of the University of Limpopo.

The Gauteng high court judge, who was appointed to the bench by Zuma in late 2017, was implicated at the commission by five witnesses, including Prasa’s head of legal, risk and compliance Martha Ngoye, advocate Francois Botes and Prasa head of legal Fani Dingiswayo.

Ngoye and Dingiswayo had told the commission that Makhubele, upon taking over the reins, had prioritised the payment of companies linked to the Siyaya group, which received several payments from Prasa.

She denied this, saying the duo were not telling the truth.

Makhubele also took aim at Ngoye for submitting to the commission that she was often found wanting in carrying out her duties with diligence.

“I deny that that I am one of the people who have been found wanting in any report, be it the AG [auditor-general], National Treasury, public protector or any court of law. There is no one who has ever found me guilty or made findings against me for wrongdoing at Prasa,” she charged.

Zondo - who was leading Makhubele’s evidence after she on Monday objected to being led by advocate Vas Soni - focused most of his questions on why Makhubele had taken the Prasa job despite having known at the time that she would be appointed as a judge.

Makhubele was interviewed by the Judicial Service Commission (JSC) for the bench in early October 2017 and recommended for appointment soon afterwards.

However, on October 19 the same year, she accepted appointment as Prasa board. A few days later, in November, she was confirmed as a judge.

Zondo fired: “Part of what makes your case strange is that here is somebody who wants to be a judge, she has gone to an interview and knows that she has been recommended for appointment as a judge, and this she knows early in October. But around October 19 [she] allows herself to be appointed as chair of a SOE in circumstances where she knows in all probabilities she is going to be appointed to the bench.

“So you are dealing with a situation that you are almost certain you are going to be appointed to the bench. Then the question arises: why is she taking this Prasa appointment when she knows she is due soon to start her duties as a judge? Why take more responsibilities instead of reducing?”

Makhubele said Zondo was mixing water and oil, adding that anyone who links the two things had “ulterior motives”.

Zondo moved to quiz her on allegations that she excluded the Prasa legal department in matters pertaining to settling Siyaya claims.

Apparently, according to Botes, who has testified at the commission, Makhubele had told him that she did not trust Prasa’s internal legal division, which was headed by Ngoye.

“Our relationship broke down after the legal panel of Prasa was suspended. Ms Ngoye was asked to write a report to the board and she wrote but was very critical of the board. They were working against us [the board],” she said in her defence.

As the tension heated up, with Zondo firing questions from all directions, Makhubele requested a water break - after which she began by questioning Zondo's line of questioning.

Zondo was unshaken and pressed on with more tough questions. But Makhubele, too, did not back down.

“I deny everything that they [those that implicated her] are saying,” she said.

Makhubele is due to appear again at the commission on August 17.

PODCAST | ANC has no teeth when dealing with corruption

Former Ipid head Robert McBride yesterday failed to appear before the commission of inquiry into state capture to be cross-examined by former police ...
News
2 years ago
Next Article