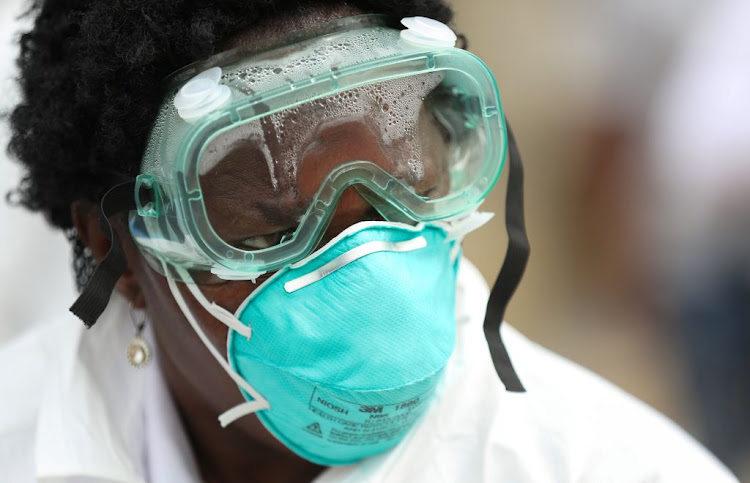 Gauteng officials on Monday said health workers made up the most Covid-19 infections in the province, with almost 2,000 having contracted the virus.
Image: REUTERS/Siphiwe Sibeko

The Public Servants' Association (PSA) on Wednesday said it would approach the inspectorate of labour to visit Gauteng health-care facilities to assess safety and health compliance amid the increasing number of health workers with Covid-19.

This is after an “alarming” surge of infections among health workers, it said.

Gauteng officials on Monday said health workers at both private and public hospitals made up the most Covid-19 infections in the province, with almost 2,000 having contracted the virus, EWN reported.

Health MEC Dr Bandile Masuku confirmed to SowetanLIVE that he has suggested to the national coronavirus command council that some parts of the province be placed under an “intermittent” lockdown.

Nearly 40,000 infections have been recorded in the province so far, with a significant increase in the past week. The province is expected to overtake the Western Cape to become the country's epicentre in days to come.

National health minister Zweli Mkhize said earlier this week that factors contributing to  rising infections in Gauteng are inward migration, the large population (especially in metros like Johannesburg, Ekurhuleni and Tshwane), increased congregating which spurs cluster outbreaks, and the level to which people are able to adapt to new behaviours such as social distancing and the wearing of masks.

The PSA said: There are widespread complaints regarding the availability of personal protective equipment (PPE) for health workers, incorrect PPE being distributed to facilities, and a rise in the number of employees contracting Covid-19.

“The lack of collaborative work has opened a gap for managers not to adhere to established departmental protocols, through the occupational health and safety committee. Health workers are exposed by managers to the high possibility of infections,” said the association.

“The rise of infections at hospitals such as Helen Joseph, Dr Yusuf Dadoo, Leratong, Charlotte Maxeke Academic, Weskoppies and Tara, and as in the Johannesburg District Health Services, predicts a disaster, not only for health-care workers, but also for patients and communities using these health-care services,” the association said.

It has called on Masuku to provide clear guidelines on how health workers will be protected.

The association said it would also approach the inspectorate of labour to visit institutions that are deemed not compliant in accordance with the department of public service circular and regulations issued by the department of employment & labour.