It's not personal: Fikile Mbalula on Somizi charge 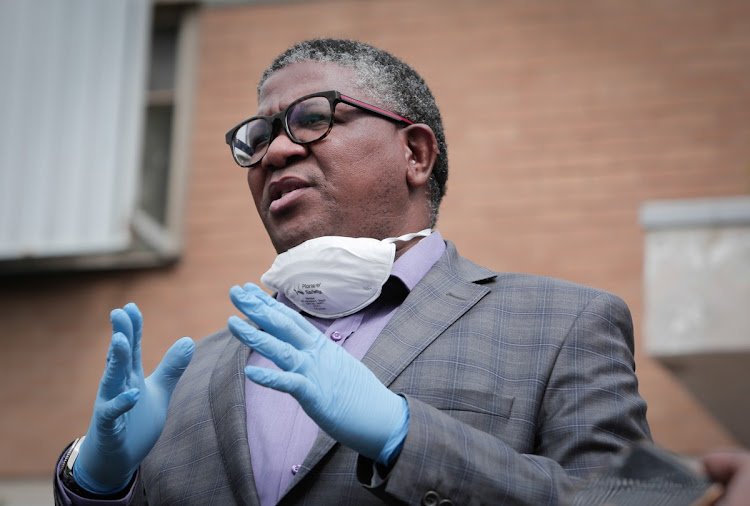 Minister of Transport Fikile Mbalula outside the Sandton Police station where he laid a charge of violation of lockdown regulation due to disinformation against Somizi Mhlongo.
Image: Sebabatso Mosamo/Sunday Times

“We live in times when things cannot be joked about,” transport minister Fikile Mbalula said on Friday as he opened a charge against entertainer Somizi Mhlongo at the Sandton police station in Johannesburg.

Hours before President Cyril Ramaphosa announced that SA's Covid-19 lockdown would be extended until the end of April, Mhlongo had asserted that Mbalula had given him a heads-up on the extension. He subsequently apologised to Mbalula for his “joke,” saying: “I'm just like you, I did not know about it, I was just guessing.”

Mbalula reacted by saying he was not willing to allow his name to be dropped into conversations as if it was true that he had leaked vital information.

Somizi, he said, should act with more circumspection.

“I've got a good relationship [with Somizi], he's my friend, but the fact of the matter of that ... we must not mix business with pleasure,” Mbalula said on Friday.

“The regulations of the Disaster Management are guiding us ... not to spread malice, to spread disinformation.”

I did not discuss the lockdown timeline or extension plans with Mr Mhlongo at all whatsoever, my conscience is clear.

I have filed my statement and attested under oath to this at Sandton Police Station. pic.twitter.com/AJCKNhsjC2

Minister of transport Fikile Mbalula will on Friday open a case against Idols SA judge Somizi Mhlongo for “name dropping and misinformation”.
News
1 year ago

Minibus taxis that failed to adhere to the 70% passenger limit increased from 18 on Monday to 509 on Wednesday, says transport minister
News
1 year ago
Next Article