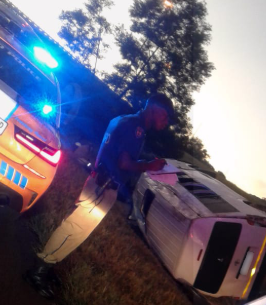 The taxi, which had been carrying 15 people, was found lying on its side on the N12 near Diepkloof, Soweto.
Image: Supplied / ER24

A taxi which was allegedly breaking lockdown regulations and carrying a full load of passengers rolled on the N12 near Diepkloof in Soweto on Monday.

ER24 paramedics said 15 people were injured when the taxi rolled.

“ER24 paramedics, together with several other services, arrived on the scene at 5.40am to find the taxi on its side next to the road. Several passengers had already climbed out of the vehicle.

“Medics assessed the patients and found that all 15 people had sustained minor to moderate injuries. Fortunately, no serious injuries or fatalities were found on the scene,” ER24 said.

The injured were treated on scene before being taken to hospital.

The crash came just days after transport minister Fikile Mbalula announced that after regulations were eased for the social grant collection period, taxis were again meant to operate under the lockdown rules.

The regulations had called for taxis to ferry commuters at 70% capacity to avoid the spread of the coronavirus. This taxi, however, was allegedly full at the time of its crash.

Gauteng commuters are worried that the increase in the number of passengers a taxi is allowed to load could expose them to the risk of contracting ...
News
2 years ago

“The truth of the matter is that we need to keep operating if our business is to continue. The fact is that there aren't enough masks and saniters as ...
News
2 years ago
Next Article