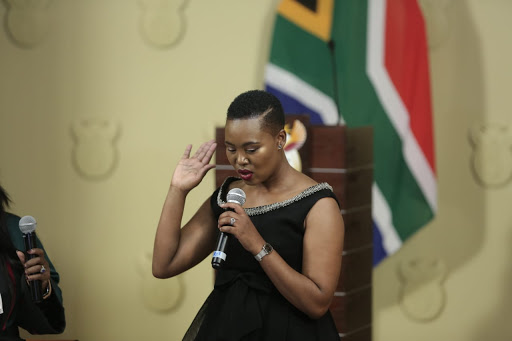 “I regret the incident and I am deeply sorry for my actions,” Ndabeni-Abrahams said in a video posted on social media.

“I hope that the President and South Africans will find it in their hearts to forgive me,” she said.

“The President has put me on special with immediate effect. I undertake to abide by the conditions of the special leave.”

President Ramaphosa placed her on two-months special leave after she violated the lockdown rules which were put in place to curb the spread of coronavirus by visiting a friend for lunch.

A photo of her lunching with ANC NEC member Mduduzi Manana caused an uproar on social media with people questioning whether rules only applied to a few.

Many have been arrested while some complain of brutality at the hands of the police and the military for violating the lockdown rules which limits people’s movement.

Ramaphosa summoned her last night and decided to put her on special leave and also directed her to apologise after he said he was “unmoved” by her reasons for having visited Manana.

In the apology video, she also she said that she wanted to urge South Africans to abide by the lockdown rules which were put in place for 21 days as of midnight on March 26.

“I wish to use this opportunity to reiterate the President’s call for all of us to observe the lockdown rules. They are a necessary intervention to curb the spread of a virus that has devastated many South Africans.

As it stands there at least 1700 people who have tested positive for the global pandemic.