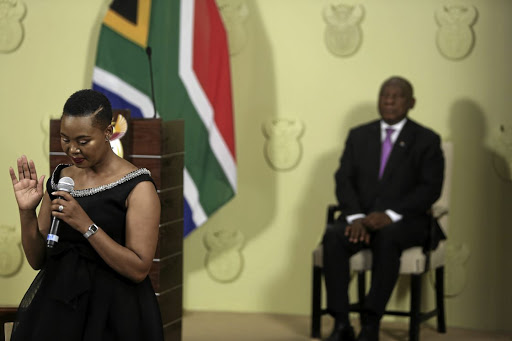 FILE IMAGE: President Cril Ramaphosa watches Stella Ndabeni-Abrahams being sworn in as the new minister of communications at the Union Buildings in Pretoria.
Image: Alaister Russell

President Cyril Ramaphosa has summoned communication minister and NEC member Stella Ndabeni-Abrahams for a meeting after she was exposed violating the government-imposed lockdown by having lunch with a friend.

Speaking to the media after a visit to Rand Water on Tuesday, Ramaphosa said he had seen the picture of Ndabeni-Abrahams having lunch with former deputy minister Mduduzi Manana, also an ANC NEC (national executive committee) member.

The NEC is the highest organ of the ANC between national conferences.

“I have seen the picture of minister Ndabeni Abrahms sitting at a luncheon with a number of friends and other people, I have asked her to come and see me so she is going to come and see me and I am going to have a discussion with her about the impact of visuals like those on what we are trying to do,” Ramaphosa said.

“It was great to host a former colleague and dear sister Cde Stella Ndabeni-Abrahams (minister of communications and digital technologies) on her way back from executing critical and essential services required for the effective functioning of our country during the nationwide lockdown,” he captioned the now-deleted post.

Ramaphosa said: “We are trying to instill a clear message to all our people that social distance is important. Let us stay at home. Let us not be going around with visitations. And if you have to, it must be work-related."

It is unclear when the meeting between Ramaphosa and Ndabeni-Abrahams will take place.

ANC secretary-general Jessie Duarte has called out both the minister and Manana for their actions.

When approached for comment on Tuesday, Ndabeni-Abrahams' spokesperson Mish Molakeng toldSowetanLIVE's sister publication TimesLIVE that they were working on a response.

“There are a few things that we need to establish,” Molakeng said.

Speaking to Jacaranda FM on Tuesday, Manana said: “I think the minister must respond for herself because I was home and she was working nearby, so it was not dinner per se.”

Manana could not be reached on his phone when TimesLIVE called and sent him messages.

I will be writing to President @CyrilRamaphosa this afternoon about Stella Ndabeni-Abrahams breaking lockdown rules. She is a leader and must set an example. I hope he takes strong action against her. pic.twitter.com/WsYQJzm051

Police minister Bheki Cele has announced a decrease in serious violent crimes during the first week of the national lockdown.
News
1 year ago
Next Article