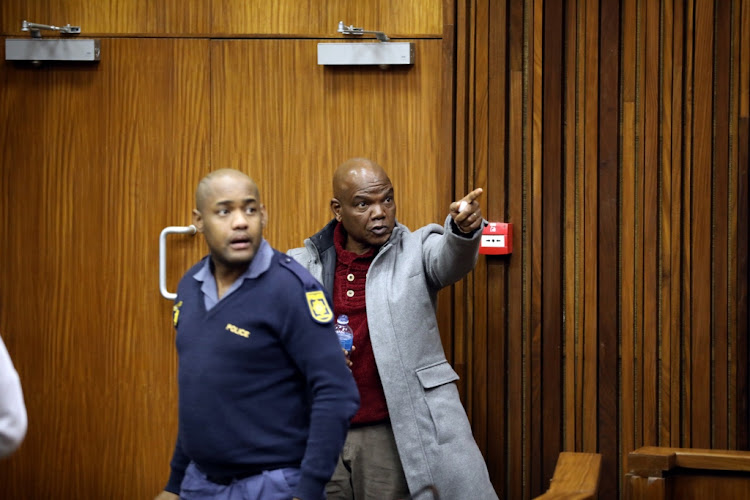 Former crime intelligence boss Richard Mdluli remonstrates with a photographer during his trial at the Johannesburg high court in 2019.
Image: SANDILE NDLOVU

But despite this Mulalo Nemutandani, the probation officer who interviewed Mthunzi's victims,  still maintained on Wednesday that Mthunzi should be sentenced to correctional supervision and not be given a custodial sentence.

Nemutandani was presenting a pre-sentencing report at the high court in Johannesburg.

Sentencing proceedings were postponed last month to allow Mdluli and Mthunzi's probation officers to consult victims of the crimes.

Mthunzi, now 60, accompanied Mdluli to a house in Vosloorus where they also assaulted Alice Manana, forcing her to reveal the whereabouts of Buthelezi and Ramogibe.

Sentencing proceedings in the assault and kidnapping case of former crime intelligence boss Richard Mdluli were postponed until March 11 to allow the ...
News
2 years ago

Ramogibe was murdered in 1999 and no-one was arrested for his murder.

Nemutandani said Manana still recalled the day of the incident vividly, when Mdluli, Mthunzi and another man came to her house and  assaulted her.

“She cried on the day of the interview,” Nemutandani said.

Nemutandani said Manana told her that on the day she was kidnapped and taken to Orange Farm, she pleaded not to have to leave her seven-year-old child alone.

Manana said she was hurt and kicked repeatedly. She  sought medical assistance afterwards as blood was coming from her ears.

Mdluli's lawyer Ike Motloung suggested to Nemutandani that there was a danger that the two accused could be sentenced indirectly for the murder of Ramogibe - a crime nobody had been charged with.

Prosecutor Zaais van Zyl SC, asked why Nemutandani had not changed her recommendation for Mthunzi's sentence, despite the serious affect the crimes had on his victims.

Nemutandani said after taking all factors into consideration, she would stick to her original recommendation of a non-custodial sentence.

Sentencing proceedings in the assault and kidnapping case of former crime intelligence boss Richard Mdluli were postponed until March to allow the ...
News
2 years ago
Next Article