The Gauteng health department is worried about one of the five coronavirus patients in the province who suffers from a kidney-related disease.

The patient is a 57-year-old male who landed in South Africa on Monday from Austria and Italy and is in a critical condition.

He was confirmed to have been diagnosed with the novel Covid-19 on Wednesday when the minister of health Zweli Mkhize announced that the tally of confirmed cases had risen to 13 after six more people tested positive.

The 57-year-old is said to be at an undisclosed private hospital in Gauteng where he is being monitored.

According to Gauteng health MEC Bandile Masuku, his condition was worrisome because of his renal disease.

“I would like to confirm the five cases of patients who have tested positive for coronavirus and one of them is a 57-year-old with a comorbidity of renal disease which we are quite worried about because those are two factors that usually give us a severe pattern of a disease that we have seen,” Masuku said.

“We are quite confident with our staff and everybody who has been working throughout, from the tracing teams to trace the contacts of the patients that we’re dealing with.”

Up to 70% of the population is likely to be infected with the coronavirus that is currently spreading around the world, German Chancellor Angela ...
News
2 years ago

One of the five people diagnosed with the coronavirus in the province is in a critical condition.
News
2 years ago 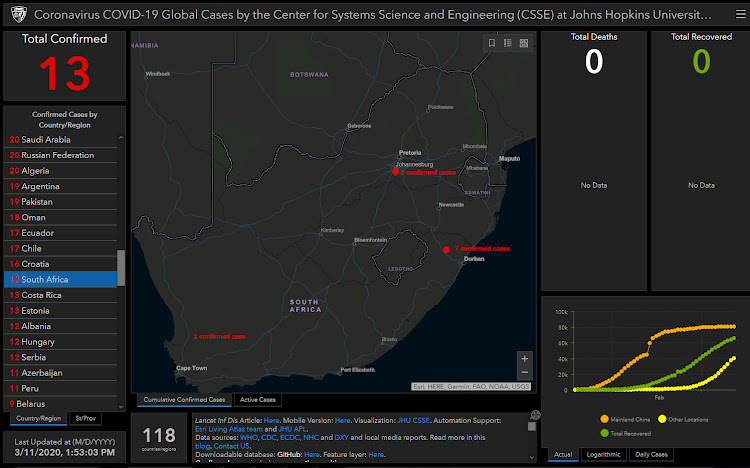 Of the six new cases confirmed by Mkhize on Wednesday, five are in Gauteng, one in KwaZulu-Natal and one in the Western Cape.

The number previously stood at seven, with the infected coming from a group of 10 people who had recently travelled to Italy.

In Gauteng, the new cases are of a 33-year-old female who was part of the Italy group, a 34-year-old and a 33-year-old couple who recently travelled to Germany and the 57-year-old male who is now in critical condition.

In KwaZulu-Natal, a 40-year-old male who returned from Portugal on Saturday has tested positive while in the Western Cape it is a 36-year-old male who travelled to several countries including Germany, Austria, Switzerland and Turkey.

“All the patients have now been advised. Those who are symptomatic have started receiving treatment. Some of these patients are already in hospital while some, specifically those who are asymptomatic, are in self-quarantine. Contact tracing has also started for all these cases,” Mkhize said.

Mkhize said that so far a total of 645 South Africans have been tested for the coronavirus.