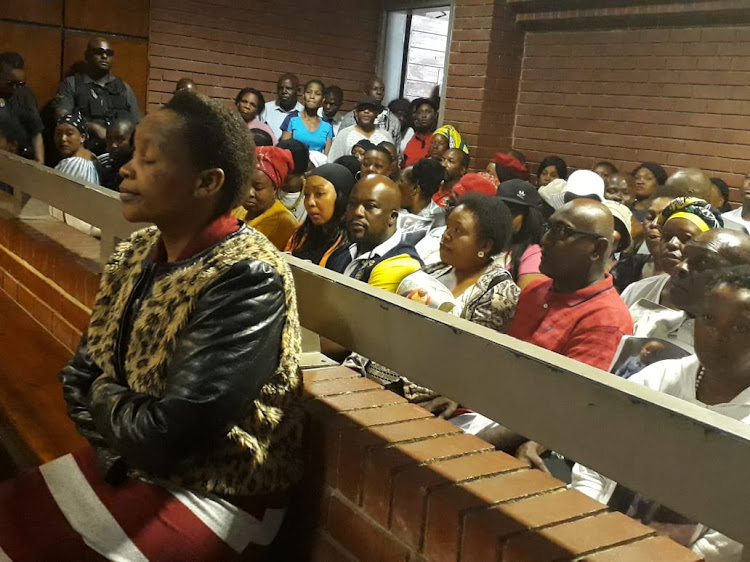 Mannana Tsabane who is accused of murdering the child she was hired to care for is expected back in the dock at the Benoni magistrate's court.
Image: File/ Naledi Shange

A Daveyton nanny who allegedly killed the child she was hired to care for was on Tuesday expected back in the Benoni magistrate’s court, in the east of Johannesburg.

Mannana Tsabane, a Lesotho national, chose to abandon her bail bid during her last court appearance in November.

She did so amid a filled court room, where community members and relatives of the slain 19-month toddler, Langelihle Mnguni, called for her release, saying they would “deal with her”.

During those court proceedings, the prosecution revealed that it was still waiting for the contents of Tsabane’s cellphone.

Prosecutor Pheello Maleleka had told the court that Tsabane’s cellphone was yet to be processed by forensics and was believed to contain crucial information would assist their case.

Maleleka said they were also waiting for little Langa’s post mortem report as well as photos taken at the scene.

The family of Daveyton toddler Langelihle Mnguni have yet to decide whether to institute legal action against the agency that brought their child's ...
News
1 year ago

On October 28, Tsabane, who had taken care of little Langa since he was two months old had told the family that she had been attacked by intruders.

She was found by the little boy's mother and grandmother when they returned from work that day.

Tsabane told them that attackers had entered the house and poisoned her and Langelihle before taking off with him.

She claimed that she had been unable to make contact with the toddler’s mother or call neighbours for help.

The little boy, however, was later found dead in the family’s storeroom as medics attended to Tsabane.

Days before his funeral, Langelihle's family told SowetanLIVE sister publication TimesLIVE that the toddler had been strangled and suffocated. He had also suffered a neck fracture.

Tsabane was charged with murder and defeating the ends of justice from her hospital bed.

Langelihle’s family said they did not believe Tsabane’s version of the intruders and instead believed she carried out the murder.

For the first time since her child’s lifeless body was found, Lerato Mnguni on Monday looked into the eyes of the nanny accused of killing him.
News
1 year ago

“Never blame yourself. Don’t think you hired someone to kill your child. Your purpose was to hire someone to look after your child, not kill him.”
News
1 year ago

Contents of the cellphone belonging to a Daveyton nanny accused of murdering the 19-month-old child she was hired to care for will form an integral ...
News
1 year ago
Next Article