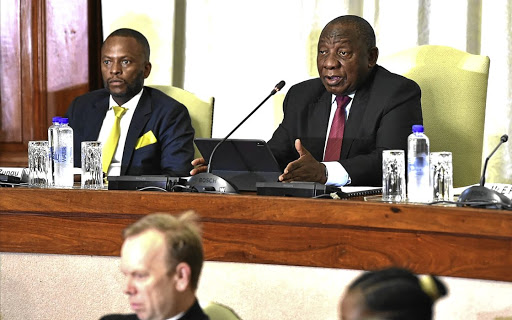 President Cyril Ramaphosa held a meeting with the Black Business Council at the Union Buildings in Pretoria yesterday.
Image: GCIS

The recent appointment of a white CEO at Eskom, the continued marginalisation of black people in the economy as well as the distribution of new frequency spectrum, were among the issues President Cyril Ramaphosa was grilled on when he met black business leaders yesterday.

Ramaphosa, who has had a series of meetings with captains of industry in recent weeks in a bid to boost the performance of the country's economy, spent hours with representatives of the Black Business Council (BBC) at the Union Buildings yesterday.

Although the meeting was scheduled a while ago, it came just as sections of the black business community were still reeling from the government's decision to appoint Andre Marinus de Ruyter as the new group CEO of state-owned power producer Eskom.

With top executive positions in the private sector limited for black professionals, many look to parastatals for opportunities. De Ruyter's appointment to the largest, albeit troubled, has left some wondering if transformation was no longer a priority for the government under Ramaphosa presidency.

Slow pace of transformation in private sector a concern for Ramaphosa

President Cyril Ramaphosa has raised concerns about the private sector's inability to fasttrack the empowerment of black workers.
News
1 year ago

Abel Dlamini, executive chairman of Sekela Xabiso, said Ramaphosa was queried about this at the meeting.

Dlamini said he was glad Ramaphosa took them into his confidence as they were beginning to worry that there was a pattern of white people being appointed into executive roles at parastatals.

"A good context was given in terms of where we are now. We need the best people to do the job, and again while the emphasis is that transformation is key, non-racialism still has to be considered, thus you tend to see some of these appointments (of white executives) coming through in institutions where you would ordinarily think black appointments would be prioritised," he said.

BBC president Sandile Zungu said they came out of the meeting convinced that transformation "is an irrevocable commitment of" the Ramaphosa administration.

"So we are quite satisfied with the explanation that the president gave in terms of the process leading to the appointment of the CEO," Zungu said.

Dlamini also told Sowetan that, during his meeting with the BBC behind closed doors, Ramaphosa committed to ensuring that black business is included in the current economic growth initiatives.

"The cry has always been that black business is marginalised as the focus, particularly of this administration, is on white-established business. We realise there is a commitment though it is coupled with a balancing of issues because we must commit to the non-racial society that we are. So it is just not about black business but about all the South Africans, that's why the all-inclusive notion came out importantly," said Dlamini.

Zungu said the president and his government delegation were asked about the allocation of the radio frequency spectrum, which is expected to bring down the costs of communications and open new opportunities in a number of sectors, as well as the black industrialists programme - which was the cornerstone of government's transformation agenda during the Jacob Zuma years.

Before holding the meeting, Ramaphosa had delivered a speech, which was open to the media, in which he bemoaned the lack of transformation in the private sector. He said corporates needed to do some introspection on why they were failing to empower black workers.

"We should all be concerned about the slow pace of transformation in the workplace and particularly the private sector. This necessitates some serious introspection by business and a clear strategy to promote employment equity," said Ramaphosa.

President Cyril Ramaphosa's decision to reinstate the presidency’s policy and research unit has been welcomed by black business, saying this was an ...
Business
2 years ago