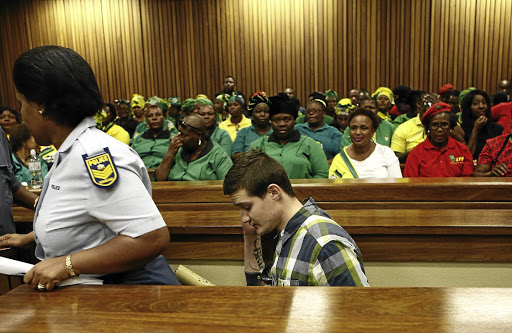 Convicted rapist Nicholas Ninow is led into the high court in Pretoria yesterday to testify in mitigation of his sentence. The BCCSA has ruled that the SABC did nothing wrong when it aired an interview with his mother.
Image: Phill Magakoe / Gallo Images

The Broadcasting Complaints Commission of South Africa (BCCSA) has dismissed complaints against the SABC over its airing of an interview with the mother of convicted child rapist Nicholas Ninow.

In a statement, the broadcaster said it was pleased by the dismissal of the case.

The interview with Chantelle Ninow, which was aired on October 27, reportedly garnered complaints from 550 people.

In the exclusive interview, Chantelle defended her son, saying he had made a mistake and was not a rapist. She said she blamed herself for how her son turned out and regretted not assisting him to overcome his drug addiction.

Nicholas Ninow was handed a life sentence after being found guilty of raping a seven-year-old girl at a Dros restaurant in September 2018.
News
2 years ago

Nicholas was last month sentenced to life imprisonment for raping a child at a Dros restaurant in Silverton, Pretoria, in September 2018.

During the trial, he blamed drugs and alcohol for his behaviour. He claimed that “sober-minded, I would have never done such a thing to anyone, never mind a little child”.

The high court heard that he had been exposed to drugs from the age of 13, allegedly by his mother.

Chantelle apologised to the victim's family during the interview.

"He made a mistake and I'm sorry to that little girl's parents and the little girl. I really am sorry. If it were my child, I would be so angry. I know sorry doesn't cut it, but there's nothing else I can say.

“I would just like to urge all those young mommies, especially the young ones, that as they get older, the gap does close and they are not your friends - they are still your children,” she said.

Twitter users were quick to react to a snippet of the interview posted on social media. Most lashed out at airtime being given to the Ninow family.

Social media had a ton of opinions during the testimony of Dros rapist, Nicholas Ninow.
News
2 years ago

Complainants submitted to the BCCSA that the interview “amounted to the glamourisation of violence and the advocacy of hatred based on race and gender”.

They said the interview had sought to solicit sympathy for the convicted rapist and his family - and in the process insulted the rape victim and her family.

"The complainants contend further that the broadcast amounted to 'white privilege', in that crimes committed by white people are 'humanised'," said the BCCSA.

Many complainants submitted their grievances in the form of a petition – a method that is not accepted by the broadcasting watchdog.

“Although the immensity of the complaints is noted, the BCCSA does not consider petitioned complaints but instead deals with complaints directly from affected persons or duly represented persons, whether natural or juristic,” said the commission.

"I cannot think of a more appropriate way a broadcaster can broadcast accurate information than getting this information from the source, whether it be the court, the perpetrator or the even the victim.

"The importance of an uncensored media cannot be overemphasised.

The BCCSA said the SABC had fulfilled its role of educating viewers about the minds of perpetrators of such crimes.

“The broadcast was thus not an attempt to nullify the severity of the crime committed by Nicholas, but the purpose was to navigate other solutions, in addition to the criminal justice system, that will put an end to violence against women and children,” it said.

Convicted Dros rapist Nicholas Ninow was sentenced in the Pretoria high court on October 17 2019. Judge Mokhine Mosopa sentenced Ninow to life in prison for the rape of a seven-year-old child in September 2018.

Long-term imprisonment and reformative programmes can save Nicholas Ninow: lawyer

Convicted rapist Nicholas Ninow's lawyer has pleaded with the Pretoria high court to impose a lesser sentence  than life imprisonment on him.
News
2 years ago
Next Article