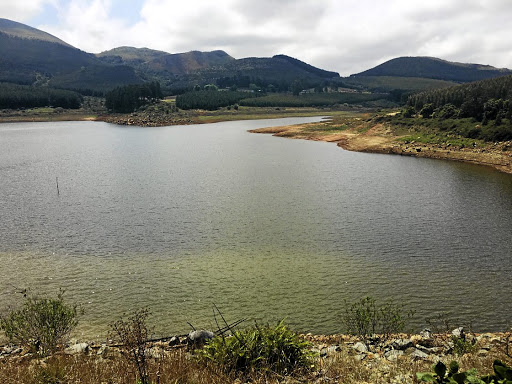 The Lomati Dam beneath the Makhonjwa mountain stands at 20% , a water mark that signals that there is water scarcity danger looming for the community of Barberton in Mpumalanga. / Mandla Khoza

Rand Water has appealed to its customers to reduce the water consumption rate by at least 530 million litres per day or face stringent restrictions.

Executive manager of operations at Rand Water Eddie Singo said: "We are still at about 4800 mega litres (4800 million litres) per day on consumption rate and we are on a drive to drop it to 4370 mega litres per day.

"At the moment residents are consuming the 530 mega litres which is supposed to help the reservoirs to recover to normal water levels."

Singo said they have reduced water supplied to municipalities by 20% from last week Tuesday.

Water department spokesperson Sputnik Ratau said the department conducted a study which looked at what's most likely to transpire due to the dire water situation the country found itself in.

Locals in QwaQwa, the former Free State "homeland", have suffered from severe drought for the past five years. A lack of infrastructure has contributed to the scarcity of water. Residents often walk long distances in order to make use of trickling natural springs, as they have to wait weeks for water trucks to deliver to their areas.

"We need to take into account that SA has a scarcity of water, the country does not get enough rain compared to other countries, and therefore water conservation should be a lifestyle, and a daily practice for all," said Ratau.

Ratau said South Africa has not yet recovered from the 2014 drought, and this alone has been a big challenge.

Ratau said an increased population has also become a challenge in water consumption. Pollution in water systems, vandalism and ageing in infrastructure, added to the problem.

Residents and businesses are starting to feel the impact of water shortages in Barberton as the Mpumalanga town's main water source - the Lomati Dam - is about 20% full.

The Mbombela local municipality in Mpumalanga says it only hopes for the rain to ease the water shortages in Barberton after the town's only water source, Lomati Dam, is at 20% in terms water levels.

Businesses are counting their losses as fewer tourists visit the town due to the water crisis and want the government to declare it a disaster area.

The tourism sector says it's loosing business to Nelspruit lodges because they have to ration their client's water usage.

"Without any doubt, let say Barberton is not different from other villages in the municipality. The situation regarding water levels seem to be a country-wide as river levels have dropped significantly.

Stage 2 water restrictions in Joburg as demand soars in heatwave

"We are not folding our arms, but when there is no water in the dam, we can't do anything," said Mbombela municipal spokesperson Joseph Ngala.

Ngala said they planned to refurbish old boreholes in the area.

Barberton head of tourism Ashrid Christiansen said: "This is a disaster. This town was just declared the world tourists site... but all that is going down as tourists might start avoiding the area because there's no safe water they can trust."

A teacher from Laerskool Barberton school who asked not to be named told Sowetan that they had to leave school early on Thursday because there was no water and the toilets were stinking.

"There has been no water for the whole day at our school so we told learners to go home. It's very hard," said the teacher.

Old Umjindi township resident Themba Lubisi said people were very angry because they have to wait for water tankers that sometimes don't come.

"What's happening is that there were people who once told us that we will run short of water, but the government ignored that.

"How can this old town called Barberton have one source of water? They should have built many dams to provide for us all," said Lubisi.

Rustenburg spokesperson David Magae said the drop in water levels has forced the city to shut down water supply from 5am to 5pm every day since last Tuesday to make sure that taps do not run dry.

He said this has affected various areas including Soshanguve, Pretoria East, Ga-Rankuwa and Centurion.

The city of Ekurhuleni has pleaded with residents to use water sparingly, providing tips to the residents on how to save water, and to ensure water is not left running on taps.