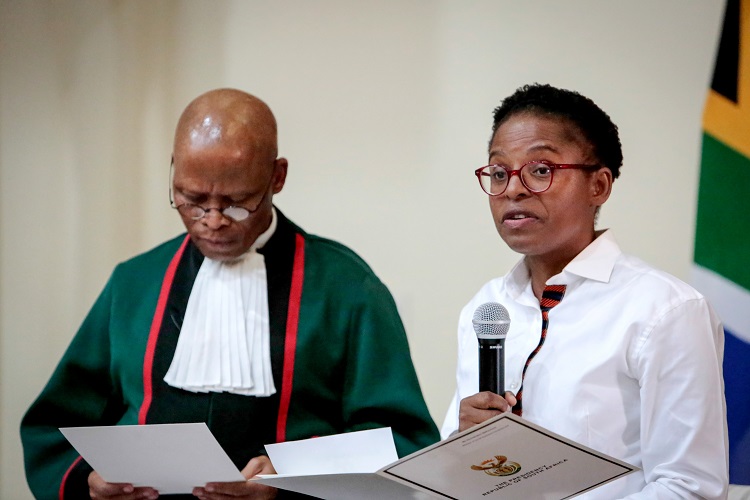 Ntshavheni denied allegations that she personally pocketed R5m from the over R1bn raised for the campaign.

“The accusations that I used the campaign funds for personal benefit are laughable at best and shows the lazy journalism that has become the norm with the mainstream media,” Ntshavheni said through a statement.

This comes after Independent Newspaper reported over the weekend that some of Ramaphosa's supporters who worked in his campaign in Limpopo felt neglected as they did not benefit post-Nasrec while others were rewarded with cash and positions.

They accused Ntshavheni of enriching herself through the campaign.

Ntshavheni, the campaign coordinator in Limpopo, allegedly gave local ANC leaders a quarter of the R6,000 allocated per branch to help sway members in Ramaphosa's favour during the branch general meetings held before the Nasrec conference.

Ntshavheni is also accused of using a portion of the more than R5m she received from the CR17 campaign funds to buy a luxury vehicle and build a mansion in Thohoyandou for her mother.

Last week, the same newspaper reported that leaked bank statements showed that Ntshavheni, along with other senior politicians, earned between R400,000 and R5m for their roles in the campaign.

Mbalula too benefited despite backing NDZ
News
2 years ago

Fikile Mbalula denies CR17 payment: 'The money was deposited long after the campaign'

Transport minister Fikile Mbalula has denied that a R40,000 payment was for his work in the CR17 campaign.
News
2 years ago

“A mere deed search against my and my mother’s names would not have only shown all properties owned by us but the years they were acquired,” said Ntshavheni.

“The so-called mansion in Thohoyandou has been a family home since 2010 and there has not been any new development on the ‘mansion’ since then except for a lick of paint. A similar search of vehicle ownership would have shown all vehicles owned by myself and my mother including that now new vehicle was purchased and all vehicles were paid off by 2016.”

She also said that the accusation that she bought 15 taxis for a third party was “insulting” to her business acumen.

She said the money raised for the campaign went towards assisting branch delegates with airtime, petrol and “at times food”.

“These coordinators are the very same comrades who are today accused of having pocketed the campaign funds for personal benefit which is a blatant lie,” said Ntshavheni.

“Those who were in the ANC branches across Limpopo at the time confirmed receipt of the assistance from coordinators,” she said.

She also dismissed notion that her appointment into the cabinet might have been a reward for her role in the campaign saying that she was one of the few young people who made it to the ANC candidate list.

“I have long accepted that I am not money and there will not be loved by everyone,” she said.

EFF MP Tebogo Mokwele is one of the people who received money from President Cyril Ramaphosa’s CR17 presidential campaign, the party confirmed on ...
News
2 years ago

The EFF Student Command has called for the suspension of party MP Tebogo Mokwele, who received money from President Cyril Ramaphosa’s CR17 campaign.
News
2 years ago

The Minister of Small Business Development Ms. Khumbudzo Ntshavheni has noted the media reports and subsequent queries on her involvement in the Presidential Campaign termed – CR17, which are based on malice and devoid of the truth. Minister Ntshavheni herself has publicly declared that she was part of a contingent of ANC leaders and members who not only supported the campaign for then Deputy President Cyril Ramaphosa to take over the ultimate leadership of the ANC, but actively organised for same in Limpopo. She even declared that she was part of the early organisers before the campaign became popularly known as CR17. Like any campaign that organised meeting, hosted events including rallies to lobby for support for their preferred candidate, the campaign had to be funded. In Limpopo, most of the funding of the campaign was from donations by comrades and businesses who believed and supported the candidature of President Cyril Ramaphosa. In the many occasions where the donations were not sufficient to cover particular cost, the national campaign plugged the gap. It is common knowledge that branches had to hold delegate nominating Branch General  Meetings and therefore needed to be assisted with airtime, petrol and at times food, such assistance was disbursed through regional, sub-regional and cluster coordinators. These coordinators are the very comrades who are today accused of having pocketed the campaign funds for personal benefi, which is a blatant lie. Those who were in the ANC branches across Limpopo at the time, confirmed receipt of the assistance from the coordinators. It must also be clarified that not a single coordinator was appointed by an individual but a collective of comrades from the various regions who were the early supporters of the CR17 campaign. The accusations that Minister Ntshavheni used the campaign funds for personal benefit are laughable at best and shows the lazy journalism that has become a norm with the mainstream media. This projects the media that lacks the basics of fact-checking but it's reporting is mere rumour mongering. A mere Deed-search against the Minister's and her mother's names would not have only shown all properties owned by them but the years they were acquired. If the deed-search was too sophisticated a search tool for the media, a mere random enquiry with the neighbours would have also shed light on the propert.  The so-called mansion in Thohoyandou has been a family home since 2010 and there has not been any new development on the "mansion" since then except for a lick of paint. A similar search of vehicle ownership, would have shown all vehicles owned by the Minister and her mother including that no new vehicle was purchased and all vehicles were paid off by 2016. In her own public profiling, Minister Ntshavheni indicated that both her and her mother were taxi owners from years back amongst other businesses. To suggest that she will buy a fleet of taxis for someone else and not herself is insulting to her business acume. Without wishing to comment on the contents of the Bank statements circulating both in mainstream and social media, as their are questionable, the cost of 15 taxis will exceed the amount of R5 million I allegedly received in my personal capacity. Allegations of sexual relations between Minister Ntshavheni and Mr Risimati Hlongwane  are not only spurious and demeaning to the Minister, but also a reflection of the level gutter journalism is influenced by patriarch, sexism, ageism, and tribalism. What is more demeaning is the fact that 63 years after the historic women's march, patriarchy refuses to acknowledge the role of women leaders in their own right devoid of sexual favours to men. As a matter of fact, Minister Ntshavheni was chosen from a pool of ANC Members of Parliament when she was appointed. The process  of her nomination to become a member of Parliament was not coordinated through the CR17 campaign coordinators, who seized to act as such post the 54th National Conference of the ANC. Records of party lists for parliament with the IEC will show that Minister Ntshavheni was amongst the few young people who made the top 100 of the ANC candidate list. Her nomination drew support from across the country and including branches that had a leadership preference different from hers going to the Nasrec Conference because like all seasoned comrades, post conference, there is political realignment as comrades rally behind the elected leadership. Minister Ntshavheni did not appointment herself to the position and therefore cannot offer a plausible explanation why the leadership of the ANC and alliance allowed the President to appoint her. She, however takes exception to insinuations that she was apointed as a reward for her work in the CR17 campaign. Earlier in her appointment the same media alleged that she was appointed because she is related to the President, another factual inaccuracy. A mere reading of these insinuations, will tell a reader that because Minister Ntshavheni is from the same tribal grouping with the President, there should be something out of the ordinary than same considerations other Ministers were appointed for as if Vhavenda do nit deserve to be Ministers or MECs in South Africa. Attempts to delegitimise the leadership of women will not succeed and Minister Ntshavheni remains focused on the tasks at hand. Minister Ntshavheni has long accepted that she is not money and therefore she will not be loved by everyone, she is just tasked with the responsibility to ensure that SMMEs in South Africa have a conducive environment and support to make money and thereby grow the economy and create jobs. She must be judged on the execution of this task.