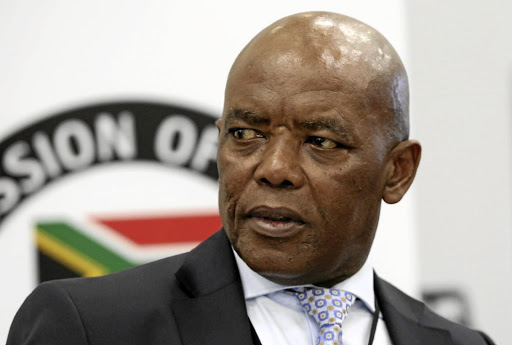 He's been widely dubbed as former president Jacob Zuma's "fall guy" over the 2013 Waterkloof Air Force Base landing - and Bruce Koloane lived up to that billing yesterday.

Appearing for the second time at the commission of inquiry into state capture in Parktown, Koloane assumed most of the blame for facilitating the landing of the Gupta family's wedding guests at the restricted Waterkloof military base in April 2013.

This flew in the face of his testimony just a day earlier, when he denied any wrongdoing on his part over the saga.

Even when the commission confronted him with telephone recordings in which he tells senior officials at the defence and military veterans department that Zuma, defence minister Nosiviwe Mapisa-Nqakula and then transport minister Ben Martins all knew of and approved the landing, Koloane maintained that he lied to them to place added pressure for the flight to be cleared.

Koloane, who was head of state protocol at the time, was suspended soon after the Jet Airways plane landed at Waterkloof. But, upon pleading guilty to three charges set out by an international relations and cooperation department disciplinary committee, he received a lucrative post as SA's ambassador to the Netherlands from Zuma.

Koloane read out those same charges while on the stand at the commission yesterday:

That he abused diplomatic channels and took it upon himself to facilitate an "illegal request" for the landing of an international aircraft at a restricted military base;

That he also spoke directly to the command post at Waterkloof and stated that Indian ministers will be arriving on the flight when this was not the case;

Koloane also stood accused of "dropping the names" of Zuma, Mapisa-Nqakula and Martins "in an effort to pressurise the command post to issue the clearance for such an illegal landing"; and

That he misrepresented facts when he told command centre flight post officer Thabo Ntshisi that this was "a unique case".

Responding to the charges, Koloane placed all the blame on himself. "I pleaded administrative negligence because the impression that had been created was that there had not been any application and I was informed by the Indian high commissioner [Virendra Gupta] that he had applied... I was of the assumption that all was done properly and by the book. I did agree that I erred in that."

In recorded conversations which the commission played between Koloane and senior defence officials, including Ntshisi, he is heard saying that Martins and Mapisa-Nqakula were aware of the flight.

Reference was also made to "Number One", understood to be Zuma, whose instructions Koloane said he was acting on.

"I indicated that at no stage did the minister of transport, defence or the president ... in any way communicate with me either by themselves or through anyone in their offices.

"I abused the power of my office by calling officials who are processing and exerted pressure on them.

"I agree that it was wrong of me to use their names... it potentially can taint the reputation and the image of the three that you have just mentioned. There was nothing in it for me," he said.

But his version of events was vastly different to his testimony when he first appeared on Monday, when he said he merely asked for officials to expedite the Indian High Commission's (IHC) application.

Koloane said he instructed Ntshisi to process the flight with the understanding that the IHC had submitted all required documentation. This time round, he said he felt the need to appease the IHC.

State capture-implicated former head of state protocol Bruce Koloane has admitted that he neglected normal administrative processes to allow the ...
News
2 years ago

The state did not follow normal processes when it allowed the Gupta family to land a privately chartered airline at the restricted Waterkloof Air ...
News
2 years ago

A senior government official went out of his way to ensure that the Gupta family were able to land a privately chartered plane at the Waterkloof Air ...
News
2 years ago
Next Article