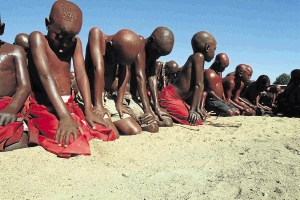 Some of the initiation schools in Limpopo, such as this one at Mpepule, GaModjadji, took in underage children.
Image: ANTONIO MUCHAVE

The Polokwane high court in Limpopo has ordered the closure of illegal initiation schools across the province.

The department of traditional affairs had brought an urgent court interdict to stop 47 illegal initiation schools, which close on Friday, from operating following their failure to obtain permits.

However, yesterday's order was suspended for 12 months to allow the illegal schools to graduate current initiates in the next coming few days and to comply with the rules.

"The court is authorising members of the South African Police Service in all the provincial regions where such schools are operating, and to assist the applicant's officials, to close down the said schools.

"The initiates who are presently kept in the illegal initiation schools be relocated or transferred to other schools which operate with valid permits issued in terms Circumcision Act of 1996 and regulations," said Phathudi.

However, Phathudi, who was presiding on the matter jointly with judge president Ephraim Makgoba, suspended the orders for a year.

"The operation of the above orders are hereby suspended for a period of 12 months from date of this order pending compliance by the respondents with the provisions of the act and regulations."

Department of traditional affairs lawyer Monare Makoti argued that schools should be closed down because their surgical doctors were not trained and were not certified to carry out such duties.

"It is the responsibility of the department to make sure that all schools are complying. At the moment we are sitting with a case of a 10-year old initiate who died from an illegal school in the Sekhukhune district.

"If there was a compliance perhaps such death could have been prevented. Because only boys from 12 years old are allowed by law to be admitted and a surgical doctor would have been trained and certified," he said.

Makoti asked the court to order the school principals to pay for the costs because they obtained their money through illegal means.

He said some schools charge R1,500 per initiate.

Makgoba said it was not practical to relocate initiates from one school to another.

"Besides, the department should make sure they inform the applicants on time if their applications were approved or declined. The respondents were only notified on the last week of the initiation schools to begin, whereas it takes two months to prepare for the school,"' he said.

Makgoba said this left the respondents with limited option to seek remedy.

At least 327 initiation schools were accepted out of 393. The province has recorded three deaths this year.

Police have rescued over 21 boys from a "bogus" initiation school in Mabopane, north of Pretoria. The rescue efforts were conducted in partnership ...
News
2 years ago

Number of girls going into initiation has gone down

Urbanisation is the key factor
News
2 years ago
Next Article