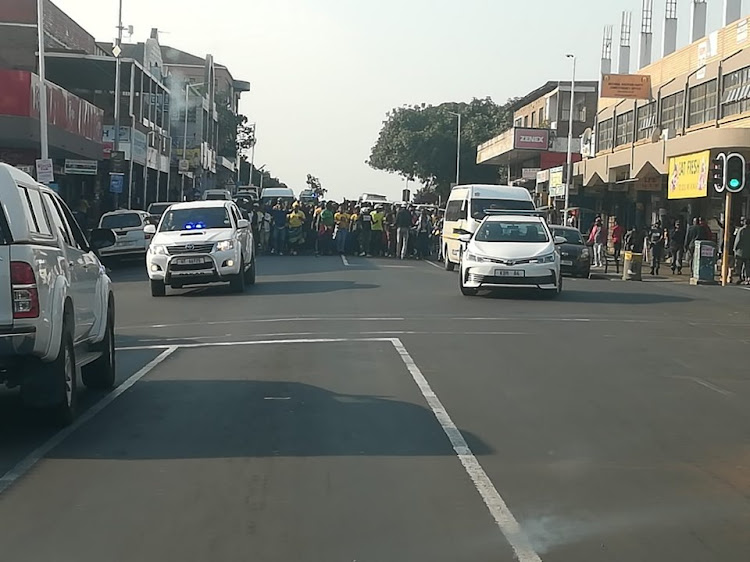 About 200 people protested in KwaDukuza last week Wednesday, allegedly over a proposal to reinstate an ANC Youth League official who was convicted and sentenced for murder.
Image: Facebook

The KwaDukuza municipality north of Durban has reopened its doors after last week’s protests by disgruntled residents over political infighting which resulted in the disruption of services.

In a statement issued on Tuesday, the municipality announced that it's offices were now open and fully operational following unrest on Wednesday last week. The community services business unit entrusted with refuse removal and maintenance of parks and gardens was hard at work to clean the town and collect refuse — an activity expected to be completed this week.

Municipal manager Nhlanhla Mdakane has also decided that tenders, closed quotations and posts whose closing dates were disrupted by the unrest, would be extended.

“We also wish to cast away all malevolent avowals made, suggesting and influencing for a rates boycott. The closure of the municipality was not an easy decision to take. However, in the interest of safety of staff and patrons, it is a decision that had to be made. We want to assure all ratepayers that our teams will be working around the clock to bring the situation to normality,” said municipal spokesman Sipho Mkhize.

Police have identified KZN and the North West provinces as the highest risks for violence during next week's general elections.
News
2 years ago

In a statement issued last week, the municipality said the unrest related to issues pertaining to political infighting.

It is believed that the unrest was about the reappointment of ANC Youth League former secretary Musi Zondi to his former position. Zondi was convicted for murder and kidnapping and sentenced to more than 20 years in prison by the Pietermaritzburg High Court last year but is appealing the matter.

KwaZulu-Natal ANC provincial chair Sihle Zikalala, who is also premier of the province, and other senior ANC provincial leaders have met with the disgruntled members of the community in a bid to resolve their concerns and were expected to visit the area again next week for more talks.

ANC provincial secretary Mdumiseni Ntuli was not immediately available for comment about what transpired during the party's meeting with the disgruntled individuals.