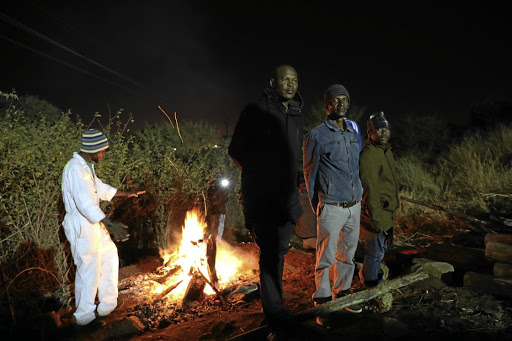 Family members and sympathisers are camping outside LanXess mine where workers have been staging an underground sit-in since last week.
Image: SANDILE NLDOVU

The mineral resources department has requested assistance from the Commission for Conciliation, Mediation and Arbitration (CCMA) in an attempt to resolve a sit-in by about 300 LanXess chrome miners.

The miners have been staging an underground protest since last week Wednesday over allegations of sexual
harassment and sex for jobs.

Ayanda Shezi, the spokesperson for the department, said CCMA commissioners had made an offer to mediate.

"Anything that endangers the lives and health of mineworkers is unacceptable to the department. Our immediate focus and priority on this matter is to ensure that all employees come up from underground safely."

Numsa national spokesperson Phakamile Hlubi-Majola said the union wanted the dispute resolved with speed because the longer the workers remain underground the more dangerous it becomes for them.

"We do not want this situation to end in bloodshed," Hlubi-Majola said.

Bheki Buthelezi, another leader of Numsa, said the management had agreed for food to be delivered to the striking workers.

"Today, only two people were sent to hospital but they have since been discharged," Buthelezi said.

A group of nearly 50 women are protesting outside Lanxess chrome mine in Rustenburg demanding mine managers to release their husbands, partners and ...
News
2 years ago
Next Article