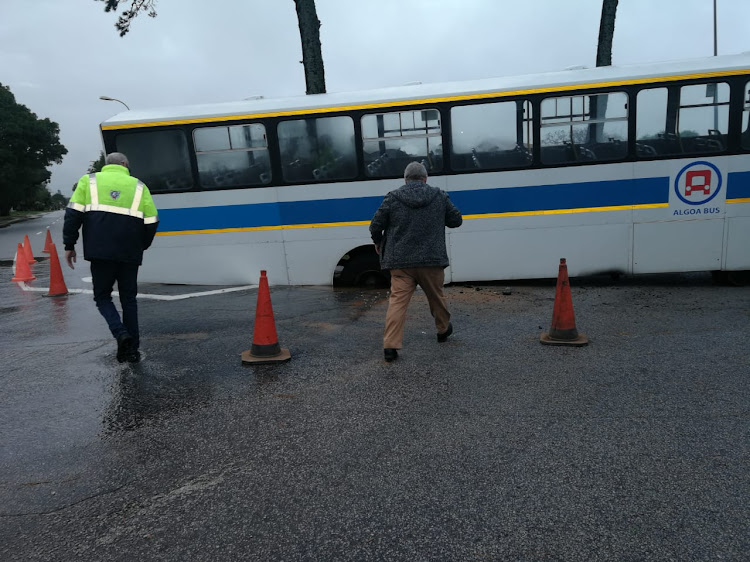 A bus got stuck in a large pothole in Lorraine, Port Elizabeth, on Wednesday morning.
Image: Gustav Rautenbach

A municipal bus got stuck in a huge pothole in Port Elizabeth on Wednesday morning.

Democratic Alliance councillor in the Lorraine area, Gustav Rautenbach, said there had been a burst water pipe in the area. The tar road may have been weakened by water seeping into the asphalt and the underlying layer.

"Because the bus is heavy, it fell in. Or if there was already a pothole, the bus driver might have not seen it because if it's flooded with water you will struggle to see it," he said.

A private breakdown service towed the bus out of the hole. No one was injured.

"When they pulled him out of the hole, it seemed like the bus drove on its own. It was not like the bus suffered major damages," said Rautenbach.

Officials from the department of water were still on the scene on Wednesday afternoon, fixing the burst pipe. The hole is expected to be filled later in the day.

No toyi-toyi over innocent lives lost in taxi crashes

A couple of weeks ago there was a horror crash on the road to Durban, a multiple-vehicle accident which included two taxis.
Opinion
2 years ago

Since 2017, at least one resident of a block of flats in Doornfontein, Johannesburg, where a woman died at the weekend had tried to warn the ...
News
2 years ago
Next Article