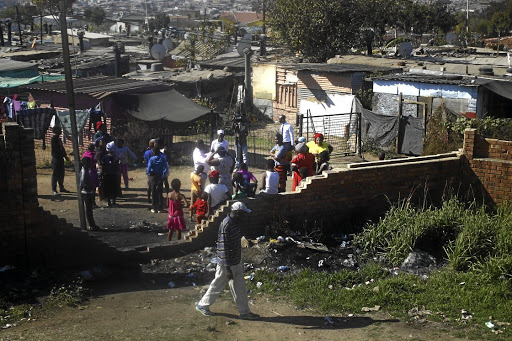 A man was castrated and beaten to death after he was allegedly caught raping two teenage girls in Ivory Park, Midrand.

Residents of Tokyo informal settlement described how the suspect endured the mob justice that ended with his private parts being sliced off "with his own knife".

This was after they heard one of the girls screaming in the bushes next to Ivory Park Stadium on Saturday night.

Residents who spoke to Sowetan said the victims, aged 14 and 18, were walking past the informal settlement when they were accosted by three men armed with a knife and a firearm. The men raped one of the girls, but the attack stopped when the other girl's screams caught the attention of community members.

Paul Maluleka, a community member who was present during the brutal assault and castration, said he was left dumbfounded and traumatised by the ordeal.

"We were sitting at my friend's house when we heard a girl screaming at the stadium. We went out and found three men attempting to rape a young girl. It seemed like they had raped the other girl who was there," Maluleka said.

Residents in Alexandra, north of Johannesburg, assaulted and set alight a suspected rapist and robber in a gruesome act of mob justice.
News
2 years ago

He said residents were upset when they realised what was happening and tried to apprehend the three men.

"The community gave chase and only caught one of them and started beating him up. Some guy walking past took the knife this guy had and cut off his penis. Nobody stopped him. Then he left the penis next to the guy and continued on his way," he said.

Police spokesperson Col Lungelo Dlamini said they were investigating a murder case in relation to the mob justice victim as well as a case of rape. He said police were also following leads to arrest the two other suspects who escaped from the mob.

Another resident called for the stadium to be demolished as it was a haven for criminals. Mthembakazi Mnisi, who has lived in the area for more than 15 years, said crime was rife around the stadium.

"We live in fear because of these criminals. We can't walk past or through the stadium when it's dark because there are criminals who are waiting for unsuspecting people."

"This place has become a criminal haven and this is not the first incident. During the day kids are here playing soccer but when it gets dark the criminals come out and camp here. They stab and mug people," Makamo said.