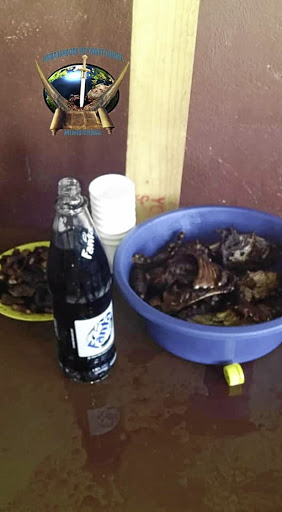 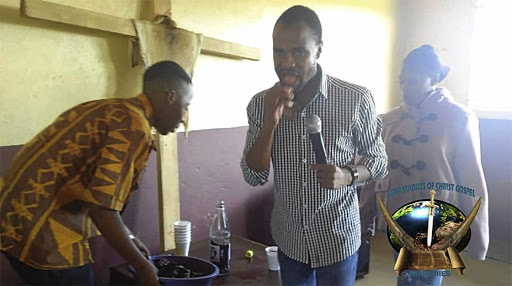 Snake pastor Penuel Mnguni seems to have groomed another priest, a Limpopo preacher who feeds his congregants dog meat as 'holy communion'.

Images of apostle Nathaniel of Ambassadors of Christ Gospel Ministries in Polokwane shocked the nation yesterday when he posted images of congregants allegedly being fed dog meat.

Now, calls for the regulation of churches have once again intensified after the curch leader shared pictures of himself serving congregants dog meat.

In the post, photos of two men standing with a dog's bloody head can be seen. Other congregants are seen eating the alleged dog meat.

"This is no longer a dog meat but the body of Christ, this is no longer a Fanta but the blood of Christ. This is no different from the biscuits and the Appletiser you buy at the shop and declare as the body and the blood, they are the same because they are declared one thing. When you eat here you will receive your freedom, healing and deliverance, this is our Lord's body and blood," the post read.

Nathaniel further states that he got his inspiration to serve congregants funny stuff from Mnguni, who made headlines when he fed congregants snakes, among other things.

A self-proclaimed pastor from Ambassadors of Christ Gospel Ministries church in Polokwane has been heavily criticised after boasting of feeding his ...
News
2 years ago

"I am not ashamed to testify that prophet Penuel is my father in the Lord, known as snake pastor [for your awareness]," the apostle said.

Attempts to get comment from Nathaniel or the church were fruitless.

The Movement Against Abuse in Churches (MAAC) reiterated its call for the state to have some form of regulation in churches.

"It is sad that we will continue to see sexual, spiritual, financial and physical abuse in the name of religious practice," said MAAC spokesperson Solomon Ashoms.

Ashoms said the acts on displayed by the church Facebook page are unbiblical.

"What the pastor has done is not of scriptural practice because Christ set an example of the holy communion as bread and wine or anything that is bread or made from flour."

In the past few years, different pastors shocked the country by feeding congregants grass, rats, petrol, and even spraying doom for healing and deliverance purposes.

Strict regulations must be put in place to stop the commercialisation of religion and abuse of people’s belief systems‚ says the commission which ...
News
4 years ago

This prompted the Commission for the Promotion and Protection of the Rights of Cultural, Religious and Linguistic Communities to conduct a study in the commercialisation of religion and violation of people's rights in churches.

The report recommended that the religious sector must have some form of peer-review mechanism, among others. It is yet to be fully processed parliament.

Yesterday, the commission's CEO Edward Mafadza said: "Our legal department will do a fact-finding investigation on this one to prepare information to guide the committee on the matter once they are appointed."

The National Society for the Prevention of Cruelty to Animals said despite the public's outrages about the incident, this was not the only case where an animal was slaughtered for religious or cultural purposes.

"Farm animals are regularly slaughtered in the name of religion and culture. The question to ask in any sacrificial ceremony is did the animal suffer? If any animal suffers before or during slaughter, it is unacceptable and a contravention of the Animals Protection Act," said spokesperson Meg Wilson.

Report of probe into rogue pastors due out on Tuesday

The commission which investigated rogue pastors and traditional healers will release its findings on Tuesday. The Commission for the Promotion and ...
News
5 years ago

'Like Jesus did to water, I turn snakes into chocolate': Pastor Penuel Mnguni

Pastor Penuel Mnguni who has been on the run for several months has hit back at the Commission for the Promotion and Protection of the Rights of ...
News
6 years ago
Next Article