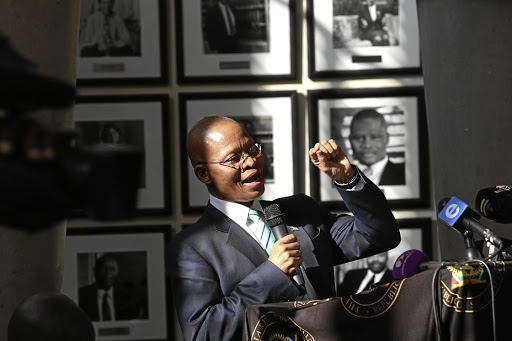 Chief Justice Mogoeng Mogoeng at the handing over of the political representatives' names by the IEC.
Image: Thapelo Morebudi

Chief Justice Mogoeng Mogoeng has a clear message for politicians who will be sworn in to serve South Africa.

Speaking at the handover ceremony of the list of 830 politicians (400 for the National Assembly and 430 for provincial legislatures) yesterday, Mogoeng said those elected were trusted not to betray the constitution.

". I can only hope that none of those to whom an oath of office will be administered would see that exercise as just one those inconvenient processes that one has to go through, itching to occupy an office rather than determined to internalise the magnitude, the enormity of the responsibility that he or she is publicly declaring to the nation that they will discharge," he said.

President Cyril Ramaphosa will appoint members of the executive who will form part of his cabinet ministers and their deputies.

Mogoeng said those appointed must not cower or look the other way when they witness corruption. "It's a thing of great shame for any of us to co-operate with corruption practitioners simply because of the enormity of power they wield.

"We over-celebrate the power we have. We're too protective of our positions and some possibly get tempted to use state resources for purposes they were never intended for. Let's sharpen our focus on what matters the most.

"The challenge to all of us is to stop kowtowing to corrupt leadership wherever it is to be found. We would never have been where we are right now had everybody been doing what they often take an oath to do but not . all public servants and other functionaries at state-owned enterprises [have] been faithful to the undertakings they made to the people of South Africa."

Mogoeng also sent a warning to the government-in-waiting about the urgency of dealing with injustices of the past, which he said have left millions reeling in poverty.

"We dare not be de-focused from the primary responsibility of ensuring that people do not continue to swim in the injustices of the past as if all that the new phase of the life of South Africa is about is just to cast a vote," said Mogoeng.

"It is a betrayal of the highest order [to be] careless about the plight of those who are dying of hunger, some of whom are forced into criminality as a way of survival, the unemployment of the multitudes of our people out there, as long as we're comfortable."

Chief Justice Mogoeng Mogoeng will today receive a list of members of parliament and provincial legislatures from the Independent Electoral ...
News
2 years ago

New kid on the politics block, the African Transformation Movement (ATM), has decided not to send its popular leader Mzwanele Manyi to parliament ...
News
2 years ago
Next Article