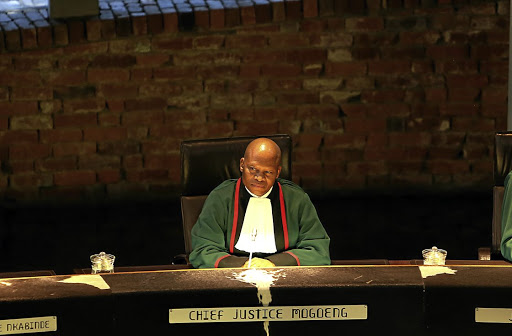 Chief Justice Mogoeng Mogoeng will today receive a list of members of parliament and provincial legislatures from the Independent Electoral Commission.

This signifies the start of the process to elect the country’s president following the national elections held last week.

The list of 400 MPs was sent to the IEC from the political parties which earned parliamentary seats in the elections last week. Of the 48 parties that contested the elections, only 15 will be represented in the national assembly.

MPs will, on the first sitting of the national assembly on May 23, be sworn in by the chief justice who will preside over the appointment of the speaker.

The ANC won the elections which means they will have enough votes to ensure that the president and  speaker of their choice will be elected.

The African Content Movement (ACM) is livid with the IEC, accusing it of filming a "drunk voter" in a video that which has gone viral.
News
2 years ago

The ANC list of 230 MPs is still before the party’s integrity committee which could see it change should the committee recommend some of the names to be reconsidered.

Should this recommendation be made, the ANC’s highest decision making body, the national executive committee, has the powers to amend the list should they agree with the recommendations.

Some of the names that have been found to be controversial are those alleged to have links to either the Gupta family or Bosasa.

ANC NEC member Fikile Mbalula in April said that although the people on the list are not in contravention of the electoral laws, their integrity would still be looked into.

“"The ANC list is not cast in stone. If there are serious matters that the integrity committee says requires people to step aside, they will step aside," said Mbalula.

It is unlikely that the committee would make any recommendations before the swearing in of MPs set for May 22 which means the members whose integrity is being question will become members of the national assembly and would have to be removed at a later stage should the NEC take that decision.