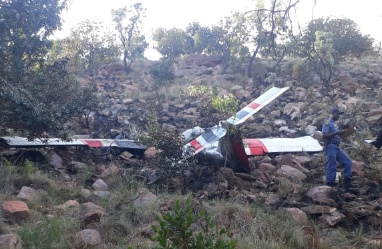 The light aircraft which went down in Mookgopong, killing both passengers on board.
Image: Supplied / SAPS

A light aircraft crashed in Mookgopong, Limpopo, on Friday, killing a husband and wife on board.

“The light aircraft crashed on the hill next to one of the game lodges situated in the Waterberg District,” he said.

“The deceased were identified as Johannes Kemp, aged 77, and his wife, Angelina Kemp, aged 66, from Volkrus, Ermelo, in the Mpumalanga province,” said Ngoepe.

Johannes had been piloting the small plane when it went down.

The couple was said to be visiting their son at the lodge when the accident happened.

It was not immediately clear what had led to the crash but the Civil Aviation Authority would investigate, Ngoepe said.