Cosatu to try to end stalemate between eThekwini and workers 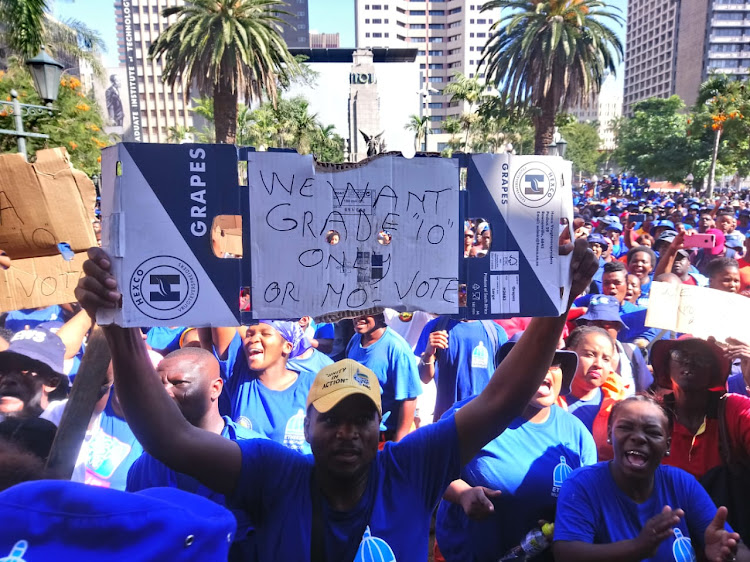 Municipal employees have been protesting around Durban over discrepancies between their salaries and those employed from the Umkhonto weSizwe Military Veterans' Association.
Image: Orrin Singh

Action must be taken against the "arrogant" management of the eThekwini municipality, Cosatu said on Monday.

The union in KwaZulu-Natal planned to engage with the South African Municipal Workers' Union (Samwu) to consider the stalemate between the municipality and its workers.

In a statement, Cosatu provincial secretary Edwin Mkhize said the situation was worsening because the city's management showed an "I don't care attitude" towards workers.

"The situation in eThekwini municipality is worrisome and becoming more disastrous. Most distressing is the failure by the municipality, as an employer, to be innovative in resolving the stalemate. But this is not shocking to us because it displays the very barrenness the municipality has showed in handling the matter in question leading to this havoc," he said.

Parts of Durban have been without water for at least a week after workers employed by the city's waste and sanitation department went on a strike over discrepancies between their salaries and the pay of those employed from the ANC's former military wing.

The workers are demanding to be elevated to grade 10 salary level, which they claimed the Umkhonto weSizwe Military Veterans' Association workers were receiving.

According to the workers, the MK veterans, who were employed by the city in 2016, were upgraded from grade 4.

The ANC in KwaZulu-Natal has called for an investigation into the promotion of uMkhonto weSizwe military veterans within the ranks of the eThekwini ...
News
3 years ago

Mkhize said the stalemate was caused by "haphazard and selective promotion" of workers without following due process and that management frustrated and undermined Samwu's attempt to engage with the employer.

"Workers have made a call for consistency in the conduct of business by the municipality. This is broadly regarded as a genuine call considering how things have unfolded."

Mkhize blamed "dark forces" for the damage and vandalism of municipal property during the strike.

"We condemn what seems to be an opportunistic tendency by some forces of darkness who are abusing the workers' genuine struggle to vandalise and damage municipal properties."

He called for an urgent investigation into the disruption of services and damage to property.

"We further believe that communities deserve quality and proper service and therefore the municipality must play its role to ensure the delivery of this mandate, and we call on the forces of darkness to desist from compromising worker struggles by disrupting services," Mkhize said.