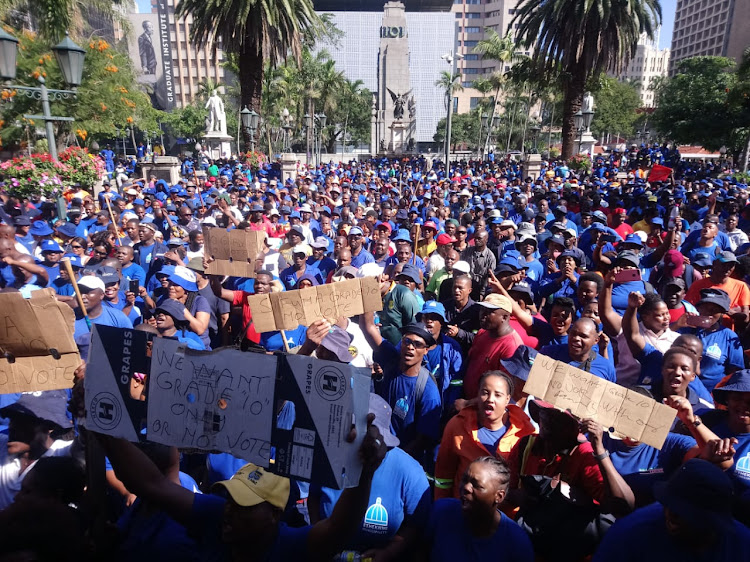 Thousands of municipal workers caused chaos in Durban this week, which the ANC has noted with 'grave concern'.
Image: ORRIN SINGH

The ANC in KwaZulu-Natal has called for an investigation into the promotion of uMkhonto weSizwe military veterans within the ranks of the eThekwini municipality.

Addressing journalists at the party's provincial offices in Durban on Friday, ANC provincial secretary Mdumiseni Ntuli said the party had noted with "grave concern" the ongoing labour dispute which has severely affected the city since Tuesday.

Disgruntled employees from the eThekwini municipality's water and sanitation department downed tools, blockaded traffic and trashed the city over claims that more than 50 MK vets were unfairly promoted.

"Key questions are whether the selected 53 people qualify to be selected, and whether those who were, were selected only on the basis of having a certain political alignment - in this case being former members of MKMV.

"Those are key questions that have not been clarified by the leadership of the city."

Ntuli addressed the media as municipal workers who were arrested on Thursday following violent clashes with police near the city hall appeared in the Durban Magistrate's Court. The workers  took part in a protest staged by members of the South African Municipal Workers' Union (Samwu).

Two senior eThewkini municipality officials and seven service providers were arrested by the Hawks on Tuesday over an allegedly illegally awarded ...
News
2 years ago

Ntuli said the provincial government should investigate how promotions were conducted in the municipal department. He said the explanation provided by the city was unsatisfactory and needed to be investigated.

Ntuli added that the party was also not happy about how Metro police and the SAPS had dealt with the matter. He said given the fact that eThekwini was the biggest city in the province, the ANC could not allow chaos to persist there.

"We think that the metro police should be better co-ordinated and the co-ordination must not be limited to them but it must include the police [the SAPS] - that is why we have called for a joint operation team that is going to be multifaceted in terms of its composition and skills.

"We need engineers to be brought on board, we need the police and even if this situation persists, we need the defence force to ensure stability."

In response to questions about whether mayor Zandile Gumede was to be blamed for the chaos amid calls for her to be fired, Ntuli said the party had not discussed this.

He said the level of violence and disruption caused by workers had been escalated by the fact that the city couldn't meet the demand to promote everyone to grade 10.

"The cost of that, we are told, will amount to R2.7bn, which is impossible for the city to handle unless it were to suspend all the services which are meant to be provided to our people, which we can't allow.

"We can't allow a lot of money to be spent on salaries instead of on ratepayers and the people of this city who have elected a government to serve them."

He added that within two to three weeks, the government would have an understanding of the type of decision that must be taken in order to "liberate the city from its challenges".

Meanwhile, Samwu provincial secretary Jaycee Ncanana said the workers would continue to fight for their rights.

He told TimesLIVE that the immediate plan of action was to ensure that union members who had been arrested received bail.

"What we have agreed is that today there will be a special bargaining council meeting just to work around the issues and see if we are able to find some common ground. But first and foremost we are addressing the issue of getting our people out from behind bars. We can't keep talking while our people are still in jail," he said.