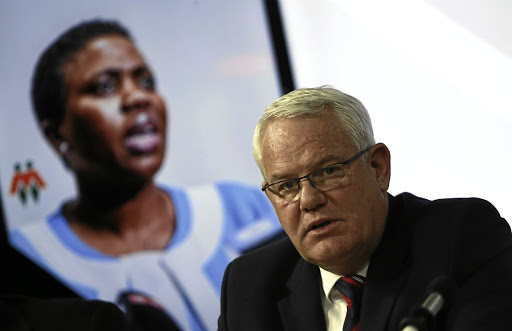 Former KZN Hawks boss Johan Booysen was schmoozed by Rajesh Gupta after a ride in a black Rolls-Royce with the president's son.
Image: Phill Magakoe

Booysen said he was chauffeured to the premises by Duduzane in a black Rolls-Royce just days before his interview for the post of national Hawks boss.

Testifying at the state capture inquiry, Booysen said he was first introduced to Zuma in 2014 or 2015, after he returned from his suspension.

He claimed he was approached by Zuma's business partner who wanted to lay a complaint regarding a case of fraud. It was alleged that the pair had been defrauded of  millions by a white man in a transaction involving an online gambling service.

Booysen appointed a member of his team to initiate an investigation. Booysen would then go on to meet Zuma on two occasions, in Durban and Sandton, either to discuss the case or for a friendly visit.

It was on the third occasion that Booysen, under the impression that he would meet Zuma again at his Sandton offices, was taken to Saxonwold. He recalled it was in August 2015 while he was with his son, Eben.

"When I eventually arrived in Sandton, they (Zuma's party) weren't there," Booysen said.

He recalled that a black Rolls Royce pulled up behind his son's parked car - inside was Zuma. Taken aback by the vehicle, Booysen accepted to ride with Duduzane to their meeting while his son followed behind.

"We went past the offices. The next moment I saw we were close to the zoo. We pulled up to the gates. I saw these huge gates which I recognised from the media. We drove in," Booysen said.

They were ushered into a lounge area where they were introduced to Rajesh Gupta.

"First they spoke to Eben. They asked what he does, he said he was in the IT industry. [Rajesh] said if he had any business propositions he should come to them. At some point, and this is where things turned funny, [Rajesh] raised the issue about me being shortlisted to become the head of the Hawks," Booysen said.

"Very people knew that I had been shortlisted for the post ... They said to me if I get appointed we should have a supper in KZN. I did not know what to make of it. I didn’t respond. I just smiled and nodded my head.

"Duduzane did not take part in the conversation whatsoever … No promises were made, no undertakings were given."

Booysen said he concluded that the conversation was an attempt by the Gupta family to show him their influence.

"I suspect that he was trying to tell me that should I be appointed, that he probably would have had a hand in my appointment and I would be indebted to him. Those were the conclusions that I made," Booysen said.

Former Free State economic development MEC Mxolisi Dukwana has admitted that he accepted R10‚000 from Rajesh Gupta in 2014‚ two years after he was ...
News
3 years ago

Former Free State economic development MEC Mxolisi Dukwana claims that Rajesh Gupta offered him R2m a month as a kickback for helping the family ...
News
3 years ago
Next Article