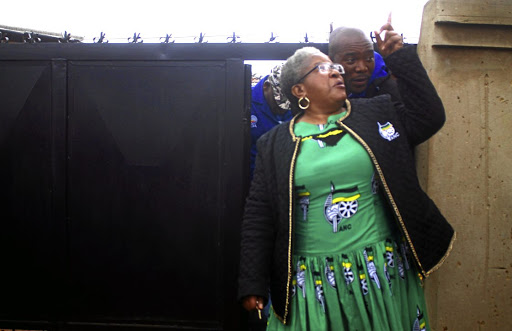 The request was made by Zodwa Zwane, Madikizela-Mandela's former personal assistant, who was clad in her ANC regalia during Maimane's visit to her house in Dobsonville, Soweto, yesterday.

The DA voted against the motion in parliament to rename the airport after Madikizela-Mandela.

The motion was brought by the EFF, but the DA argued that this was an election stunt. The DA also argued that renaming the airport would cost the taxpayer about R20m.

Zwane said: "I feel that she is not honoured and recognised for the contribution she made in the Struggle."

Fikile Mbalula, the ANC's elections head, defended the party on Tuesday after tweeps slammed him and the ANC for "rejecting" Winnie ...
News
3 years ago

Maimane said his party was not in favour of renaming the airport after Madikizela-Mandela as other plans were in the pipeline to honour her.

"There are different ways [to honour] Mama Winnie and the City of Joburg is doing something to that effect.

"There's a public consultation process and the people of the Western Cape will make a decision in that regard," said Maimane.

The DA leader said honouring the Struggle icon would be done in different forms.

"There are multiple ways to honour South Africans and public consultations will be made in this regard.

"The partyvoted against it [renaming the airport after Madikizela-Mandela] because we think Cape Town International Airport is an appropriate name for the airport," said Maimane.

Johannesburg plans to confer the Freedom of the City on her, the highest honour it can bestow on an individual.