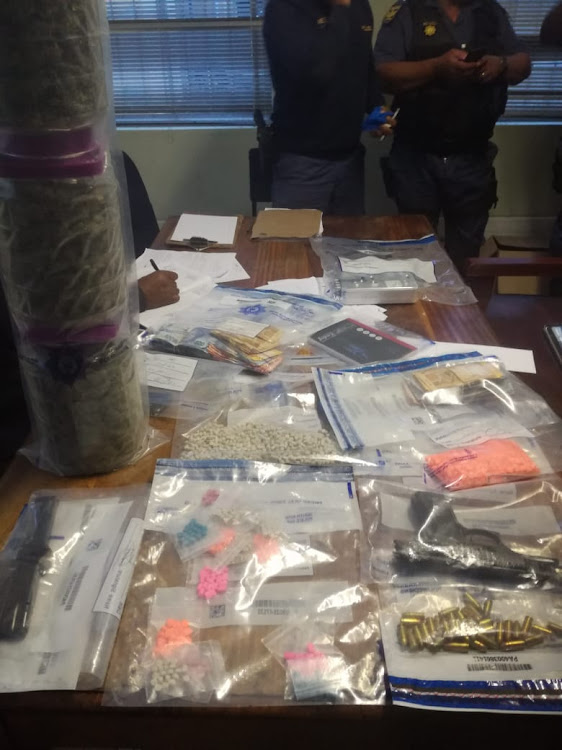 Some of the drugs and other items seized by the anti-gang unit in a raid on two residences in Plumstead on Friday.
Image: Supplied by SAPS.

The police anti-gang unit in the Western Cape says it is continuing to make inroads in its war against illegal firearms and drugs.

On Friday, members of the unit seized a firearm and large quantities of drugs, culminating in the arrest of four suspects,  during raids on two residences in the Cape Town suburb of Plumstead, it said.

“In a targeted raid, AGU members with much-needed intelligence pounced on two residences in Plumstead. In one dwelling in Normandly Village, police members arrested three suspects aged 33, 35 and 36 for possession of a prohibited firearm, ammunition and dealing in drugs,” police spokesperson Brigadier Novela Potelwa said.

A policeman and a reservist stationed at the Kensington police station are expected to appear in the Cape Town Magistrate’s Court on Thursday to face ...
News
3 years ago

As part of the same raid, at a dwelling in Gull Road in Southfield, AGU members arrested another suspect aged 36 for dealing in drugs.

The suspect would face charges of dealing in drugs, she said.

“All arrested suspects will appear in court on Tuesday. Further investigations into whether the suspects could be linked to other crime continue.

“The unrelenting efforts of the Unit are commended by SAPS management in creating safety within Cape Town communities,” Potelwa added.

A 46-year-old man was shot dead when three gunmen opened fire on him at point-blank range while he was sitting in his blue BMW at a fuel station in ...
News
3 years ago

The Unit say the alleged gang member terrorised communities living on the Cape Flats and has been linked to several killings.
News
3 years ago
Next Article