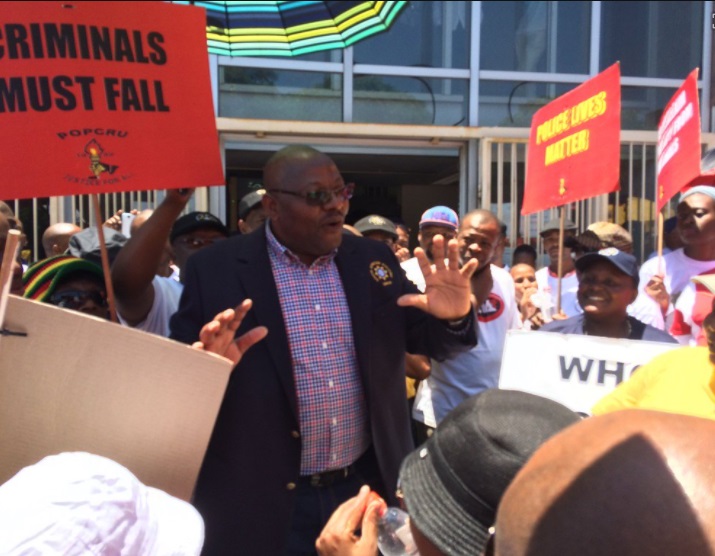 The South African Federation of Trade Unions (Saftu) has expressed shock and “disgust” at allegations that the president of the South African Policing Union (Sapu), Mpho Kwinika, was "assaulted" by police officers at the weekend.

According to Saftu, eight police officers in Sunnyside, Pretoria, arrested Kwinika on what it termed “trumped up” charges and are said to have assaulted him without provocation.

National Saps spokesperson Brig Vish Naidoo confirmed the arrest, and was adamant that police operated "within the confines of the law". He also mentioned - without providing specifics - that there was "resistance" during arrest, which allowed officers to use "minimum force".

But Saftu was nonetheless critical of what happened.

“The South African Federation of Trade Unions is shocked, disgusted and dismayed at the brutal assault of the president of the South African Policing Union, comrade Mpho Kwinika," Saftu said in a statement.

Unions and the police ministry yesterday maintained that all officers will be on the beat today.
News
3 years ago

In their statement, Saftu said: “This assault lasted several hours and in this process they broke his arm, burst his eardrum and [he] has suspected broken ribs. In the ordeal, that lasted six hours before [he was charged], they refused him his right to inform his lawyers and family and also refused him medical treatment.”

According to Saftu, Kwinika was denied access to a toilet and was forced to sleep in his own urine.

“This type of treatment on trade unions is what the Botha and Smuts regimes only reserved for its worst political opponents. Now, right under the nose of the so-called 'New Dawn', this is still happening again.

"Sunnyside police station has been transformed into Zimbabwe’s notorious Chikurubi prison where torture and beating of government political opponents has become a special skill and trade.

“Saftu strongly condemns this barbarism by the police. The constitution places on their shoulders, the protection of the tenants of the constitution," the federation said.

The federation said it would write to President Cyril Ramaphosa to order an investigation into what happened.

Kwinika is set to appear in the Pretoria Magistrate’s Court on Wednesday.

Responding to Sadtu's allegations on Monday night, Naidoo said: "Our police acted within the confines of the law. If anyone feels otherwise, they are welcome to open a case. When such a case is opened, we will bring it to the attention of the Ipid (Independent Police Investigative Directorate) for investigation.

"When a police officer is effecting an arrest and there is resistance, they are within their rights to use minimum force to restrain a suspect."