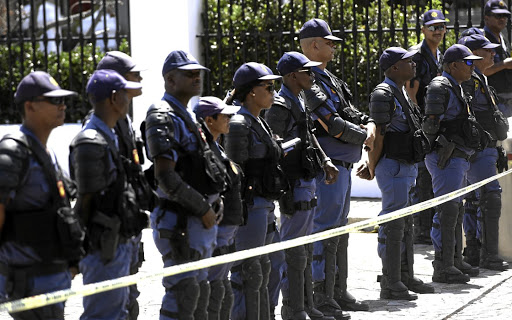 Two police unions and the office of the police minister have denied that police officers will embark on a strike action today to demand promotions.
Image: Brenton Geach/Gallo Images

Unions and the police ministry yesterday maintained that all officers will be on the beat today despite messages suggesting the men and women in blue would be going on an illegal strike.

Yesterday, a message purporting to be from police management to commanders was circulated on social media alerting officials to record absenteeism at police stations.

"We hereby urge you to record every absence in accordance to SAPS absenteeism management policies...

"No annual leave, family responsibility leave or sick leave is to be captured from Saturday 2019-03-16," the message read.

Police spokesperson Brigadier Vish Naidoo said police were not allowed to strike as they are essential service.

He said he had no idea who was behind the rumoured strike action.

The Police and Prisons Civil Rights Union (Popcru) also said it did not receive any mandate from its members to strike.

"We don't know who is coordinating the strike. We want to find out as well," said Popcru general secretary Nkosinathi Thaledi.

Over the past week, there have been messages circulating on social media believed to be from police officers who are not happy with how the unions have handled the issue of promotions in the force.

The messages said specialised units promoted their constables fresh out of college to warrant officers while officers based at stations were ignored.

This concern was also raised by the SA Police Union (Sapu).

The police are going to spend R2bn promoting 69‚219 officers over three years to clear a backlog dating back to 2011/12 and improve the "morale and ...
News
2 years ago

Sapu spokesperson Peter Ntime said the union was still engaging the police ministry on the issue.

"You cannot have a person who worked for 10 years in one rank. Then you have a unit, a constable working in it within three years is promoted into a warrant officer. What are you saying to the person who has been working at the charge officer?" Ntime said.

"The first people who will arrive will be either a van or the flying squad. These people are not being catered for in terms of this agreement."

Ntime said the union was not in support of the strike

"We have engaged our members that they must not embark on a strike . it is an illegal strike."

Police Minister Bheki Cele's spokesperson, Reneilwe Serero, said the messages remained rumours as the minister had not been notified of a strike.