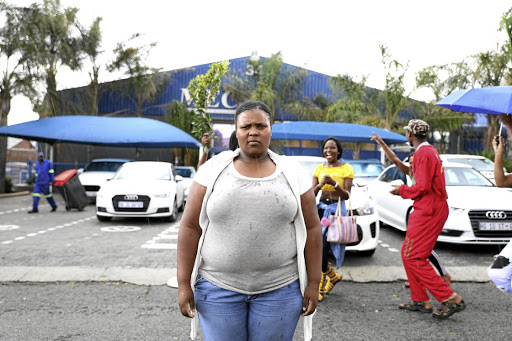 Nomusa Skosana feels that she has been targeted by management because she is a shop steward. /Mduduzi Dzingi

An Ekurhuleni mother was summarily fired from her job at a chemicals company for apparently drinking water from a tap thereby allegedly contaminating it.

Nomusa Skosana told Sowetan that she was summoned to a meeting for drinking water from a water bath using her hand. A water bath is a laboratory equipment used to collect water and keep it in a specific temperature for chemical production.

Skosana, 28, of Tembisa, is employed as a line operator at Mecs Contract Filling and Manufacturing in Edenvale.

She said she later learned that the meeting she was summoned to was just the beginning of her dismissal.

Her boss allegedly reprimanded her aggressively for drinking from a water bath.

The boss then instructed her to go and drink water from the toilet, which she refused to do.

Six months pay but not job back
News
3 years ago

Former SABC chief operating officer Hlaudi Motsoeneng should not be reinstated because he doesn't have the required qualifications.
News
3 years ago

Skosana said she had argued that everyone drank from the water bath and that there was no need to be picked on and humiliated in front of her colleagues. She said there was no designated place where employees can drink water during working hours.

She said her boss then called his senior, identified as Fred Rugheimer, who runs the company. Rugheimer allegedly instructed Skosana to go and drink at the wash bay.

After 30 minutes, she was called by the human resources (HR) department alerting her that she would be going for counselling following the altercation.

"I explained to HR people that I could not go and drink water at the toilet because we clock here when going to the toilets, which are far from where I worked. It is supposed to take us just three minutes. If you take more than that, the company deducts money from your salary," Skosana said.

After what was supposed to be a counselling session, Skosana immediately got a letter informing her she would be going for a hearing.

EFF demands sacked Mugg & Bean manager be given his job back

Mugg & Bean manager was allegedly dismissed because customers did not want to be served by a black manager.
News
3 years ago

On March 11, a hearing was held and witnesses came to testify. Seven days later, Skosana was served with a letter of dismissal.

In the dismissal letter seen by Sowetan, Skosana was fired for failure to comply with company rules; insubordination; behaving aggressively, committing indecent act by drinking water from the water bath and failing to adhere to safe working procedure.

As a breadwinner for her family of six, Skosana described her dismissal as a move by management to get rid of her because she was a shopsteward.

Workers at the company have already submitted demands to management complaining about, among other issues, the three minutes they have to spend at the toilet, no recognition of sick notes, not getting employed permanently and not being provided with protective clothing.

Rugheimer referred Sowetan to his lawyer.

Skosana's union, the Black Power Emancipation Allied Workers Union of SA, has taken the matter to the Commission for Conciliation, Mediation and Arbitration.