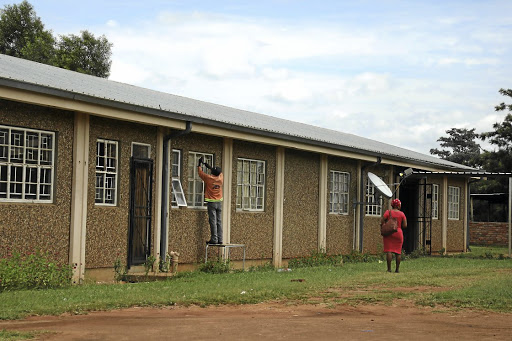 A man replaces the windows at Mmametlhake Seconday School after Derrick Bopape smashed them with bricks.
Image: Thulani Mbele

The Mpumalanga man, who was shot by a police officer after he hurled bricks at the windows of his former school, has died in hospital.

Now, Derrick Bopape’s family in Mmametlhake, Mpumalanga, are demanding answers from the police on his death.

Bopape was shot in the arm by the police after he broke the windows at Mmametlhake Secondary School, demanding to see the principal about two weeks ago.

A video showing Bopape throwing bricks at his school and at police officers in their van went viral on social media.

His sister Itumeleng Bopape, 27, told Sowetan that the family wanted the police to be held responsible for his death.

“We saw him about a week ago while he was still in ICU. He seemed to have been recovering and the doctors said he was much better than he was when he arrived at the hospital,” Itumeleng said.

Following his shooting, Bopape was taken to the local clinic before being transferred to Witbank Hospital in eMalahleni, which is two hours from their village.

Itumeleng said the family was left devastated when police arrived at their home to inform them of her brother’s death on Wednesday.

A Mpumalanga man who was shot in the arm for breaking the windows of his former school and attacked police officers has died.
News
2 years ago

“Police officers came to our house and they just said Derrick was no more. They did not have more details about what happened,” she said.

Yvonne Bopape, the deceased’s other sister, said the 25-year-old’s demeanour began to change days before he was shot.

“He was always a loner and wouldn’t be seen with a large crowd. He enjoyed his own company and that’s how we knew him. Derrick would also stop whatever he was doing and stare at nothing for minutes, seemingly lost in thought.

“I called my big brother and sister, and asked them to come to the house so that we can speak about Derrick’s behaviour,” she said.

The family said they have not seen Bopape’s body as yet and have not been informed what caused his death.

“All the police could tell us was that his body is in a government mortuary.”

Prior to going on the rampage, Bopape had approached grade 10 pupil Phumelelo Masha and demanded his school bag.

Masha said whenhe arrived at the school, Bopape was near a flight of stairs.

When Masha asked him why he wanted his bag, Bopape angrily repeated: “I said give me that f***ing bag.”

Masha, 20, said he then ran away, but Bopape started looking for him and asking to seethe principal. Pupils then started mocking and booing him,with teachers locking the doors of the school’s admin block.

Bopape then went on the rampage, hurling bricks at windows before attacking a police van that was called to intervene.

The Independent Police Investigative Directorate’s spokesperson Moses Dlamini said he could only comment today, because his office was closed yesterday.