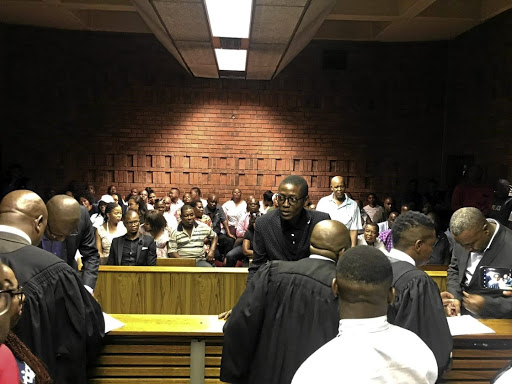 His lawyer said Mathibela would instead be approaching the high court to challenge his arrest and continued detention. Mathibela, 32, looked snazzy in all-black outfit with a stylish jacket and a matching golf T-shirt when he appeared at the Pretoria magistrate's court yesterday.

He jokingly said he would have been better dressed had he known there would be "a photo shoot" in the courtroom.

"Nkabe re kentse leather if ne re itsi ke photo shoot [We could have worn leather if we knew they'd be a photo shoot], he was heard whispering to his co-accused Elias Skhosana and Stemmer Monageng.

This was shortly after magistrate Desiree Stigling gave the media permission to take pictures of the accused.

Mathibela, Skhosana and Monageng are facing charges of intimidation, and extortion after being accused of running an extortion ring in Mamelodi, east of Pretoria.

The once feared Mamelodi taxi boss, Vusi Mathibela, was reduced to a laughing stock.
News
3 years ago

Mathibela is also charged with assault.

Mathibela did not continue with his bail application as he opted to take his matter to the high court where he will challenge the lawfulness of his arrest and detention.

His lawyer Solomon Mkhabela, who also represented Skhosana, could not confirm when Mathibela's application would be filed.

The feared taxi boss handed himself over to police last week after apparently being on the run from authorities.

On his first two court appearances, Mathibela seemed uneasy and almost taken aback at the number of media personnel present.

Stigling described the 32-year-old's case as "a matter that has required extraordinary security measures" due to the number of heavily-armed special unit officers present in the courtroom.

Before being nabbed, Mathibela was already out on R50,000 bail in an unrelated matter, for the murder of North West businessman Wandile Bozwana.

He played a cat-and-mouse game with authorities until he handed himself over to the Germiston police.

Skhosana and Monageng yesterday detailed in their affidavits how police assaulted and suffocated them in a bid to track down Mathibela.

In his affidavit, Skhosana said: "They dragged me out of my car and forced me into their vehicle and I wasn't given an opportunity to explain myself.

"I thought I was going to be unconscious because they suffocated me with an evidence bag in their car, assaulted me and asked me to tell them where Vusi was."

Mamelodi’s number one tsotsi Vusi “Khekhe” Mathibela claims to have been assaulted by police officers after he was arrested.
News
3 years ago

Monageng, who was arrested on the same day as Skhosana, detailed how he was assaulted while being interrogated about Mathibela's location.

His lawyer Mpesi Makhanya read his affidavit in which he alleged that police officers assaulted him in front of his children and wife.

"That night, they [officers] told me I won't get bail if I don't give up Vusi.

The next night, they took me to my second house which they ransacked, assaulted me and took my wife's laptops.

"I refused to answer questions without my lawyer present, but they continued assaulting me until I gave them the information about my businesses," he continued in his affidavit.

Stigling postponed the matter to Friday for the bail hearing of Skhosana and Monageng to continue.