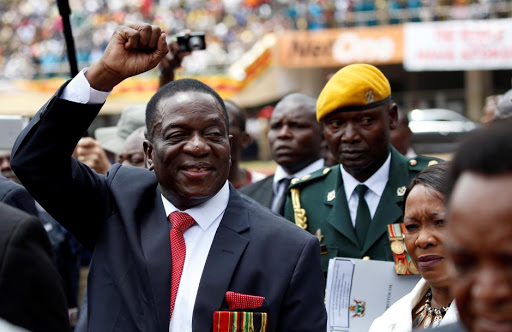 Zimbabwe president Emmerson Mnangagwa arrives ahead of his inauguration ceremony to swear in as president in Harare last November.
Image: REUTERS

The second session of the national dialogue with July 2018 presidential candidates at State House in Harare on Friday got off to a rocky start‚ with some candidates and their representatives walking out.

Some snubbed the event entirely for various reasons.

President Emmerson Mnangagwa‚ who did not attend the second session‚ set up the national dialogue to address the country’s socio-economic problems. The first meeting was on February 6‚ when four committees were set up.

The first committee was to focus on the institutional framework of the dialogue‚ while the second would deal with the agenda items for the dialogue. The third was going to determine the convenor of the dialogue‚ and the fourth would be responsible for monitoring and evaluating the implementation of the agreed issues.

But Daniel Shumba’s United Democratic Alliance (UDA) withdrew from the second meeting because they were "insincere‚ choreographed‚ and a highly compromised process".

President Emmerson Mnangagwa has issued a thinly veiled threat to doctors and lawyers whom he accused of being accessories in last month’s stayaway ...
News
2 years ago

In a statement‚ the UDA said: "We disagree with the process‚ purpose‚ issues and level of engagement. Clearly‚ no outcomes can be expected from this facade. The process starts with a predetermined agenda even before agreeing on the moderator‚ issues‚ or milestones. It’s inconsequential and of no effect."

Noah Manyika’s Build Zimbabwe Alliance (BZA) also did not attend the second session‚ which the party said must produce a democratic‚ competent and integral governance outcome if done sincerely.

Manyika argued that the continued absence of the MDC Alliance - the biggest opposition party in the country - had had negative effect on the whole process.

"It is my position that any dialogue that does not include the MDC Alliance and other critical stakeholders will not pass the credibility test locally and globally‚" he said.

For the average Zimbabwean grinding out a living in our difficult economy‚ Wednesday was not an ordinary day. Many people were still coming to terms ...
News
3 years ago

With the meeting under way‚ deputy minister of information‚ publicity and broadcasting services Energy Mutodi claimed everything was smooth sailing without the MDC Alliance in attendance.

"Today representatives of various political parties established committees to facilitate national dialogue. The national dialogue will go on without MDC Alliance who have refused to accept defeat in last July's elections‚" Mutodi said.

The MDC Alliance snubbed the dialogue from the onset because the party refuses to recognise President Mnangagwa as a legitimate leader‚ branding the dialogue as a huge farce. Another presidential candidate‚ Joice Mujuru of the National People's Party (NPP)‚ ridiculed the gathering as a "photo moment".

Sources said the dialogue has seen the emergence of three camps with various interests. There are some that are pro Zanu PF‚ some who seek relevance by being close to the system and those that feel the committee is already failing to address the real needs of the electorate.