Bowlers must bail out Proteas against Sri Lanka 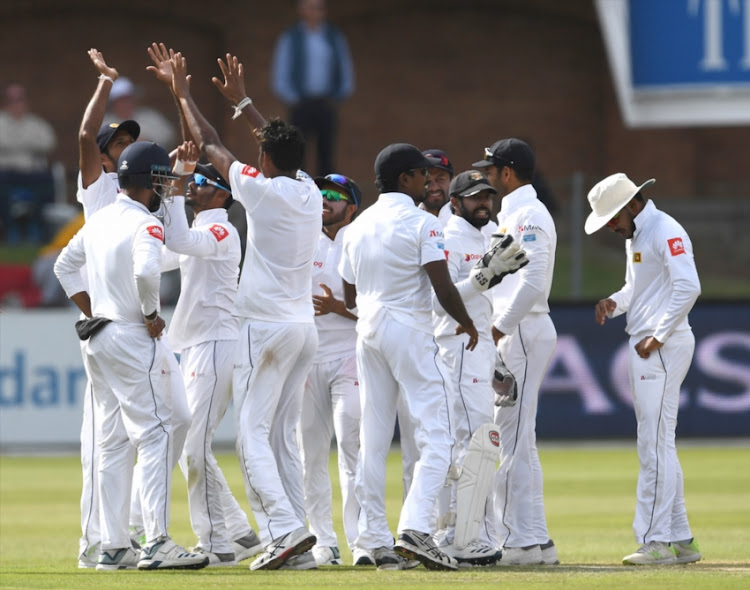 Not for the first time this summer will South Africa’s bowlers have to bail out their batsmen if they are to rescue the Test series against Sri Lanka.

It was a helter-skelter second day of the second Test at St George’s Park in Port Elizabeth on Friday as 18 wickets fell between the two sides.

The upshot of it all is that South Africa set Sri Lanka a target of 197 to clinch the series 2-0 after being bowled out for a dismal 128 in their second innings.

Seamer Suranga Lakmal was the best of the Lankan bowlers claiming four for 39.

Sri Lanka eventually brought the curtain down on a crazy day by reaching 60 for two at the close‚ losing the wickets of Lahiru Thirimanne (10) and captain Dimuth Karunaratne (19).

Kusal Mendis (10) and Oshada Fernando (17) will resume for the tourists on Saturday with 137 more runs to get.

It was the bowlers who brought the Proteas back into the game in the morning session of day two on Friday by taking the remaining six wickets to blast Sri Lanka out for 154 – an overall lead of 68. Kagiso Rabada finished with four for 38 and Duanne took three for 61.

South Africa’s top order and middle order batting effort then played out like a bad record on repeat.

Much like in Durban‚ there were batsmen who got themselves in‚ only to get out. And the more the team and management speak about setting it right‚ the deeper they appear to sink into the mire.

Aiden Markram made 18 and Hashim Amla looked good for 32 and then became one of Dhananjaya de Silva’s three victims in the innings.

Captain Faf du Plessis showed his team-mates how to play in making an unbeaten 50 but the others failed to replicate his effort.

Normally‚ when wickets tumble to this extent‚ the blame falls on the pitch. But‚ there has been very little glaringly untoward about the surface. There was nothing that kept low or bounced excessively from a length.

Nobody was ducking and diving. There was seam movement and it was a bit slow which is to be expected at St George’s.

Markram said at post-match press conference on Thursday that it was possible to make runs if one applied oneself.

Du Plessis also said pre-match that the pitch had the same look as the one South Africa won against Australia last summer. Only this time‚ there was no AB de Villiers to separate the sides with a tenacious century.

And for a side chasing a historic series victory in South Africa‚ Sri Lanka’s effort at the crease bordered on bizarre as batsman after batsman came in swinging from the hip although there were also a few suspect defensive techniques against the quick bowlers.

In a low-scoring game such as this one‚ application‚ good judgment and patience are the key to success.

There was very little sign of trying to stick around from the Sri Lankans whereas another 40 or 50 runs would have been huge in the context of this game.

South Africa will have to fight with all that they have in order to save the Test on Saturday.

They are staring down the barrel of second consecutive whitewash (home and away) at the hands of Sri Lanka in the space of only eight months.

That’s not the kind of outcome that their team management would have envisaged coming into this two-match series.