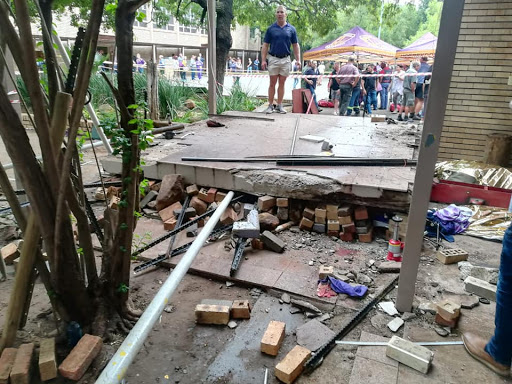 A total of four pupils were killed and 20 others were left injured after this walkway collapsed at Driehoek high school in Vanderbijlpark February 1, 2019.
Image: Julia Ramonana via Facebook

A fourth pupil has died in hospital following the walkway bridge collapse incident at the Hoërskool Driehoek in Vanderbijlpark on Friday morning.

The Gauteng department of education made the announcement on Sunday.

“The Gauteng Education MEC Panyaza Lesufi is saddened by the passing away of another child from the Hoërskool Driehoek Tragedy, that occurred on Friday, 01 February 2019. The fourth child died last night, 02 February 2019, at a local Hospital," said department spokesperson Steve Mabona.

"His condition was worrisome, as he went in and out of theatre on several occasions. Unfortunately, he succumbed to serious injuries. The school leadership will be visiting the family this morning.”

At least three pupils at a Vanderbijlpark school were killed and several injured on Friday when a walkway fell on them.
News
3 years ago

The pathway bridge collapsed on Friday morning killing three pupils instantly and leaving over 20 others injured.

Pupils were coming from the morning assembly heading towards their classrooms when the bridge, made out of concrete. collapsed on them.

The deceased pupils were identified as Marli Curry‚ Jandre Steyn and Rayden Olckers.

The tragedy sent shock waves across the country and prompted an immediate response from the provincial and local governments.

Lesufi visited the school accompanied by religious leaders, the new mayor of Emfuleni Reverend Gift Moerane and other members of the public.

He announced that the school would be closed until it was declared safe.

On Saturday the department said three pupils had been discharged from hospital while others are still receiving medical attention.

The deceased pupils were identified as Marli Curry‚ Jandre Steyn and Rayden Olckers.
News
3 years ago
Next Article