'This town is racism capital' 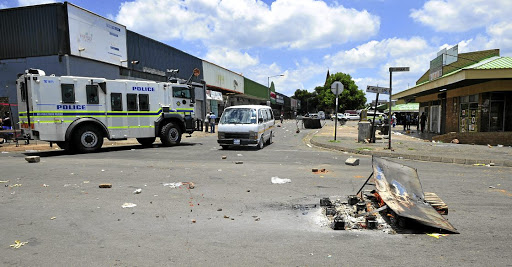 Bronkhorstspruit town was shut down by protesters after a security guard was stripped down to his underwear and forced to walk in the rain after he was found drunk and sleeping on duty.
Image: Veli Nhlapo

Bronkhorstspruit came to a standstill yesterday as thousands of residents protested following an incident in which a security guard was stripped naked to his underpants and made to walk home in the rain after being found sleeping on the job.

The town's shops and other businesses shut doors as residents marched to the Bronkhorstspruit police station and barricaded most roads in the town with tyres and rocks in protests of what they described was a racist behaviour against Mabuza.

The residents of Ekangala, Rethabiseng and Zithobeni townships descended on the small town in Tshwane metro demanding the arrest of a supervisor who "humiliated" security guard Charlie Mabuza on New Year's Day.

A Bronkhorstspruit security guard was stripped down to his underwear and forced to walk 3km in the rain after his supervisor caught him sleeping on ...
News
2 years ago

"This is getting out of hand. Police are supposed to be the first line of defence in the protection of people's rights and the communities around here," said ANC Youth League Tshwane regional chairperson Lesego Makhubela.

"The security company involved in the racist incident is contracted to a number of businesses around here that is why we have closed every business in the area."

He said any business that had contracted the security company "must immediately terminate its contract".

"We are saying that in the same manner in which they responded in Oscar Pistorius case, withdrawing endorsements, they must do the same with this company. If they continue with the contracts of the company it will mean that they are sponsoring discrimination," Makhubela said.

SowetanLIVE reported on Monday that on New Year's Day, Mabuza was forced to strip down to his underwear and walk for 3km after his boss found him sleeping and smelling of alcohol while on duty. He was fired on the spot.

Security guard's uniform stripped after being fired.
News
2 years ago

Mabuza pleaded with his supervisor, explaining to him that he had no other clothes to change into to go home but that did not help.

Mabuza worked for the GEW Secure Security in the town east of Pretoria. The owner, Dewet Vermaak, said he was disappointed about the treatment that Mabuza suffered at the hands of one of his employees who he claimed had since resigned.

Makhubela said racism was a common feature for workers in the town of Bronkhorstspruit.

"This is the headquarters of racism. white racists here openly discriminate against black people.

"There is a primary school we are going to in the next few days which openly discriminates against black people."

Makhubela added there were businesses which were deliberately exploiting black people, paying them peanuts and treating them as inferiors.

Police said a case of common assault has been opened against the man involved in the incident.

"The docket is in court with the prosecutors to decide on the matter. The charge that was opened with the police is that of common assault," said police spokesperson Constable Munyadziwa Phungo.