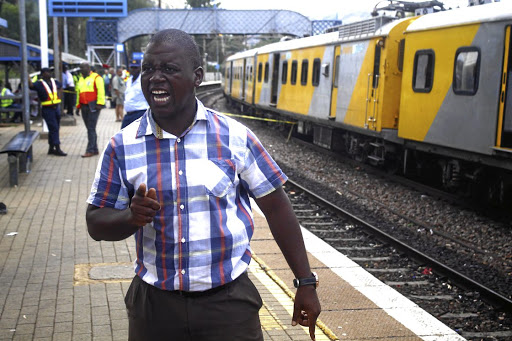 A train collided with a stationary train at the Mountain View train station in Pretoria yesterday. Kabelo Maheya was in the train when the collision occurred.
Image: Kabelo Mokoena

An eyewitness who missed yesterday's deadly train collision by a whisker says one of the trains experienced problems along the way and had stopped for 20 to 30 minutes on multiple occasions.

Velly Jente, who witnessed the aftermath of a horrific crash which claimed three lives and injured more than 600 people at the Mountain View train station, north of Pretoria, said the collision was caused by a signalling problem. He said drivers were forced to use cellphones because the system was not working, which led to delays.

"I'm very hurt. I don't think this is an accident. They failed to fix the problems and now people are dead. Some of those people are breadwinners in their families," he said.

Jente had just disembarked from the train and went to buy fried chips when he heard what he thought was an explosion yesterday morning.

When he rushed to the platform, Jente was met by the sight of injured people lying on the train tracks and crying out for help.

In January last year, the Rail Safety Regulator imposed an immediate ban on Passenger Rail Agency of SA (Prasa) to stop using manual signalling amid complaints that the practice was placing the lives of commuters at risk.

This was after a series of accidents, including one where 200 people were injured and one person died after two trains collided. Three trains had been authorised to be on the same route at the same time.

Prasa had to approach the court to prevent the suspension of its safety permit.

Yesterday, spokesperson for the regulator Madelein Williams said they would release preliminary findings of their investigations today.

Authorities yesterday confirmed that the incident happened when one train crashed into another stationary train upon arriving at the station.

Both trains were travelling along the same line between Mabopane and Pretoria.

Jente said he and others tried to assist by removing people from the train tracks.

"It was bad. People were crying out. There was blood everywhere. I saw children among the injured."

Two people have been killed and dozens are injured in a train accident near Pretoria's Mountain View train station.
News
3 years ago

Jente, a 40-year-old municipal worker, said he was fortunate as he hopped off the train from Mabopane immediately when it stopped at the station.

He said they wanted answers as to how two trains arrived at the station at the same time.

Police officer Kabelo Maheya, who had remained on the stationary train after it arrived at the station, said they were shocked to see another train coming towards them.

"Suddenly the train was too close. The driver tried to hoot and hit the brakes but it was too late," Maheya said.

He said when the crash happened some commuters fell while others were ejected from the train.

"People were screaming. I fell and my pants were torn. My cellphone was also damaged."

Yesterday, provincial police spokesperson Maj-Gen Max Masha said the incident happened when one train hit a stationary train upon arrival at the station.

Masha said some commuters died as a result of the impact while those injured were rushed to local hospitals.

"From our side as the police we are investigating an inquest. If we establish that somebody was negligent then it will be culpable homicide."

The daughter of one of the injured commuters told Sowetan her mother had been complaining about train services in the area for months.

Rosina Makamela said they received a panicked phone call from their mother Rahaba Makamela, saying she had been involved in a train crash and was waiting for ambulances to transport her and others to the hospital.

She said Makamela had left their home in Soshanguve around 6am to catch the train on her second day back at work after the December holidays. She said Makamela, 62, sometimes arrived at home after 7pm despite knocking off at 3pm, due to the delays.

"I think they should cancel the train service because people have been complaining but nothing is done to fix the problem. Maybe they should introduce more buses."

Mofokeng said scores of commuters suffered moderate injuries, while others suffered light injuries. She said Metrorail would set up a walk-in centre to assist people involved in the crash.