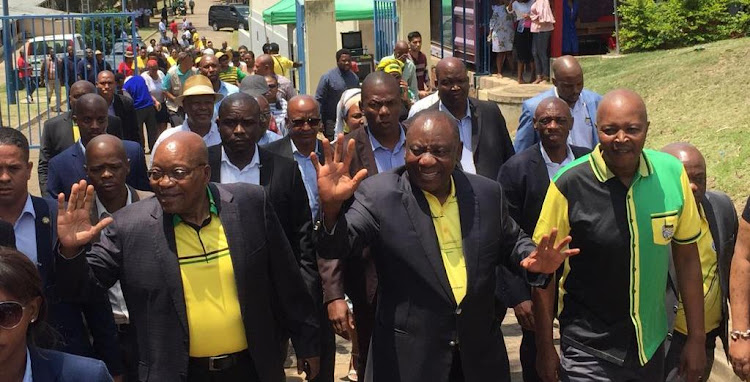 ANC president Cyril Ramaphosa and former president Jacob Zuma greet members of the community whilst on their way up to the wreath laying ceremony at Ohlange Institute in Inanda, north of Durban.
Image: Neo Goba

ANC supporters bussed in to the Ohlange Sports stadium in Inanda‚ north of Durban‚ for the party’s main January 8 birthday rally on Tuesday‚ chanted in support of former president Jacob Zuma immediately after President Cyril Ramaphosa concluded his speech.

This is despite Ramaphosa veering from his speech to express gratitude to Zuma during the rally‚ seemingly attended by Zuma die-hard supporters.

“Thank you‚ Nxamalala‚ for handing over the baton to me. I will run with it together with the ANC NEC and we will make you proud and make our country great‚” Ramaphosa said at the conclusion of his January 8 address.

As Ramaphosa ended his address‚ the crowd chanted: “Zuma‚ Zuma!”

Earlier in his address‚ Ramaphosa also pandered to the former president’s supporters by insisting that the pair have a good relationship. He further used his relationship with Zuma to depict what unity ought to look like in the party.

Zuma attended the rally and sat alongside Ramaphosa on stage and later joined his successor in cutting the ANC birthday cake.

“We find ourselves in the key moments in history where we are called upon to restore the movement after a period [during] which our organisational capacity was diminished somewhat‚” Ramaphosa said as Zuma looked ahead stone-faced.

Ramaphosa used his address to highlight unity in the organisation and admitted that the job was incomplete.

“We should not falter in our resolve to act with urgency and purpose to take the process of unity and renewal to even greater heights.”

Ramaphosa did not fully delve into the sluggish state of the economy‚ instead saying that the ANC manifesto was a plan to grow the economy and create jobs.

Ramaphosa will deliver the party manifesto at the Moses Mabhida stadium in Durban on Saturday.