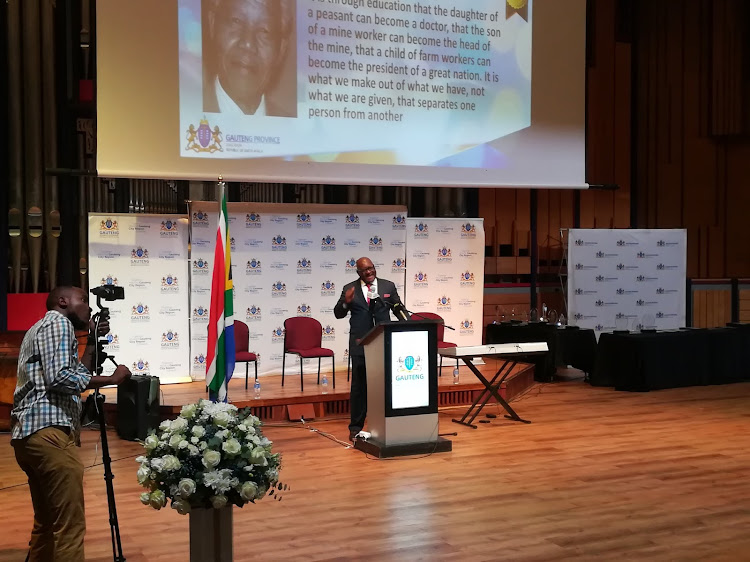 Gauteng premier David Makhura at the announcement of the provincial matric 2018 exam results in Pretoria on January 4, 2019.
Image: via Education Department

The top matriculants in Gauteng will each receive a four-year bursary to a university of their choice, the provincial government announced on January 4 2019.

This comes as premier David Makhura adopted a slogan categorising Gauteng as the “top dog” of the 2018 National Senior Certificate results.

He was speaking at the announcement of the provincial matric results at the University of South Africa in Pretoria on January 4 2019.

Makhura said Gauteng used to tell other provinces: “Watch, we are coming for you next year.”

“Gauteng is top dog this year.”

He said education was the priority of all priorities in the country, adding that it was not something that could be achieved alone.

“It is a social collective enterprise, there are many role players involved. Without students, you can’t have an education system.”

Makhura said provincial education MEC Panyaza Lesufi was the “best MEC in the republic of South Africa”, saying he was “the business”.

“I am a premier who is happy with both the coach and the players. These players include the teachers, parents, school governing bodies, those who organise groups to support education in our communities, the counselling groups and the mayors.”

A total of 41,410 pupils in Gauteng obtained bachelor passes.

Eight of the province’s districts were among the top 10 best performers countrywide. 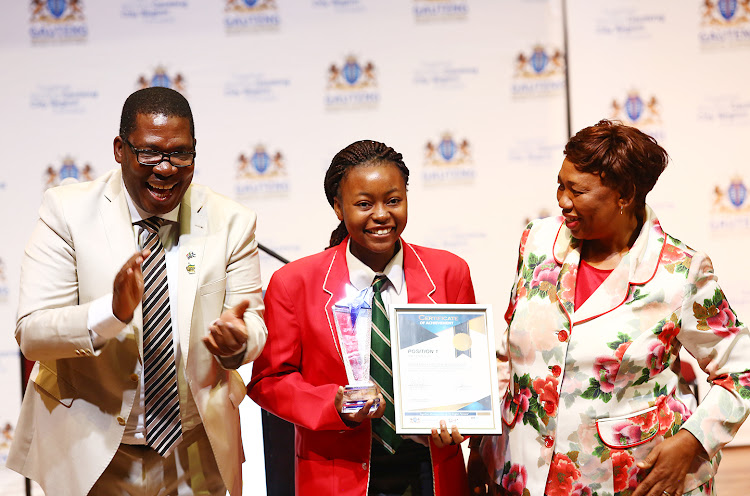 MEC for Education, Panyaza Lesufi and Minister for Basic Education, Angie Motshekga celebrate with Christine Mudzingwa from Greenside High School who is placed number one overall in the matric class of 2018 in Gauteng.
Image: Masi Losi

Before his official speech got under way, Lesufi shared a story of his Grade 1 year, back in 1976.

He thanked a teacher in the audience for protecting him and keeping him safe when he felt like giving up.

“When others mocked the size of my head, it was this teacher who said: ‘It is not the size of your head, it is what is inside of that head that makes you.’

“Without a teacher, there is no nation. These results of today don’t belong to us, it belongs to teachers,” he said.

Lesufi announced that the matric class of 2018 collectively obtained 25,000 distinctions, of which 11,400 came from township schools.

Of the top 20 districts in the country, 15 Gauteng districts were among them.

Only nine learners passed with 30%.

“I am calling on our critics, try another story, because this story is outdated. It is not about the 30%, but the bachelor passes.”

Lesufi said a school which stood out for him was a school in the Vaal that had a 54% pass rate in 2017.

He said only three schools in Gauteng achieved less than 70%.

Lesufi announced that the top learners in Gauteng would each receive a four-year bursary to a university of their choice.

Makhura told Lesufi that there was a need for more system-wide innovations. He said the next target was that no school in Gauteng should achieve less than 90%.

“You can read many books about parenting. Until you have a child, you will have no idea. It is very hard to raise a child and make sure that they reach this level of development.”

“Without education we will be nothing as a nation.”

Tshwane mayor Solly Msimanga, who was also in attendance, said when he had visited a school in Vlakfontein, south of Johannesburg, on January 4 2019, he was shocked to see the matric class of 2019 already in uniform and in class.

“This is the type of commitment that principals and teachers are putting forward to say: ‘We are willing to go the extra mile.’

“I want to take my hats off to the principals and teachers. Salute to you.”

Msimanga also congratulated the class of 2018 and their parents for supporting them.

“We need to make sure that education in South Africa talks to the future that we want to see. This country is pregnant with possibilities.”